Little Miss Shelby County Sabrina White said she was not really into pageants, but when her friends wanted to become pageant queens, she decided to give it a try.

Last year, 12-year-old Sabrina won the third alternate award in the Little Miss Shelby County Pageant, but this year, she took the crown.

When Sabrina, a seventh grader at Chelsea Middle School, decided to try for the crown the second time, Sabrina and her mother, Misty White, decided to hire Calera-native Katherine Powell, director of Bella Pageant Productions, to help Sabrina with her walk. 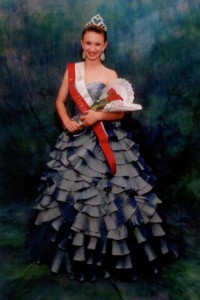 On June 24-25, Sabrina will compete for the title of Little Miss Alabama in Huntsville. She’ll be modeling sportswear, which she gets to design into a theme all her own.

“They get a t-shirt, and they have to change their shirts in some way,” Misty said. “They come up with a theme’ they get to have fun and don’t have to be serious.”

Sabrina said she chose “a little nautical theme” with a sea captain’s hat and “sequins everywhere.”

In the Little Miss Shelby County Pageant, Sabrina was asked questions about her home life, family and the qualities she believes a queen should possess, namely inner beauty.

In addition to her pageantry days, Sabrina serves Birmingham’s homeless with her church, Mountain View Baptist, once a month. She’s also involved in “pretty much every sport,” and other extracurricular activities.

“I’m like a geek at school; I love math, and I’m on the math team,” Sabrina said. “I broke every stereotypical barrier.”

Misty said the pageants teach her daughter so much more than how to be a beauty queen.

“The pageant teaches self-esteem, poise and how you lose more than you win. There are so many beautiful girls; you have to learn how to lose,” Misty said. “This was Sabrina’s 10th pageant, and it’s the first time she won queen. It’s not just about beauty.”