Jags top Warriors in another tourney 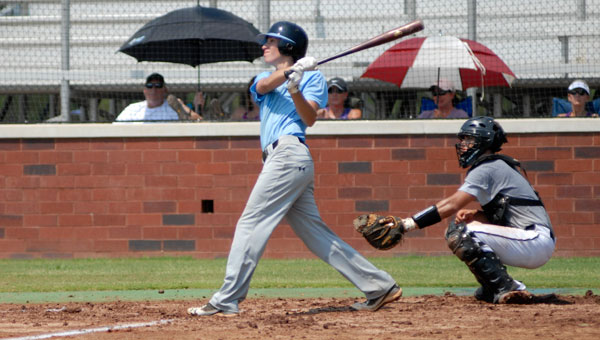 Scouting each other next spring shouldn’t be a problem for either the Thompson High School or Spain Park High School baseball teams.

After meeting twice during the 2010 season in the Birmingham Metro tournament, the two teams have followed a similar track during the summer season.

The Warriors and the Jaguars have met in two separate summer tournaments, with the latest showdown coming in the Spain Park wooden bat tournament June 9.

One week after picking up a 2-0 win over the Warriors in the Hoover National High School Baseball Showcase, Spain Park sealed another 2-0 win over Thompson in the opener of its wooden bat tournament.

Kennington gave up six hits and struck out four batters in a five-inning shutout against Thompson.

Will McDonald led the Jaguars at the plate as he finished 2-for-2 with two singles.

Hunter Kahn finished 1-for-2 with an RBI double in the victory. Mikey White and Cowart scored one run each.

Colby Sherman led the Warriors at the plate as he finished 2-for-2 with two singles.

Kenny Nabors took the loss on the mound after giving up two runs on two hits with three strkeouts and a walk in three innings. Nabors hit three batters in the game.

Spain Park took a 1-0 lead in the bottom of the second inning.

Cowart was hit by a pitch before McDonald moved him to third base on a single to right field. Cowart scored on a passed ball by Nabors.

The Jaguars capped the scoring with a run in the bottom of the third inning.

Nabors hit White with a pitch to lead off the inning. White stole second base and advanced to third base on a passed ball before scoring on an RBI double by Kahn to the right-center field gap.