The ghosts that haunt Montevallo 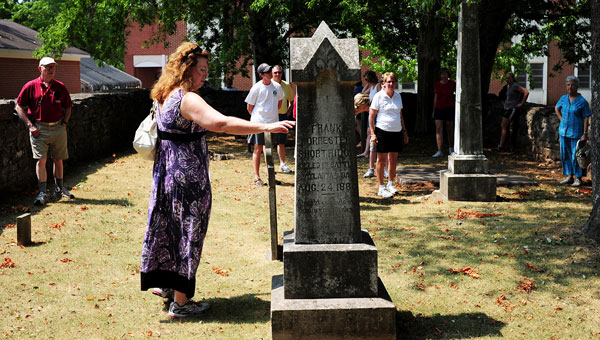 Librarian Kathy Lowe tells the ghost stories of the University of Montevallo in the King family's cemetery on campus. (Reporter photo/Jon Goering)

MONTEVALLO – The ghost lore of the University of Montevallo, which has passed between students and residents of Montevallo for years, was shared during a ghost walk on the university’s campus on June 11.

Kathy Lowe, the new director of UM’s Carmichael Library, led a walk around the campus, telling the stories of UM’s most infamous ghosts.

“I was a reference librarian, and people would ask all the time about the ghosts,” Lowe said. “We decided to set stories straight; we decided to inform people of the real story.”

Sophomore Condie Cunnningham lived in Main Dorm in 1908. According to Lowe’s research and the minutes from a board of trustees meeting, on Feb. 4, 1908, Condie and her roommate were melting chocolate for fudge in a chafing dish. They ignored the 9:30 p.m. bell signaling an approaching curfew, and when the 10 p.m. curfew bell rang, they scrambled to put away their fudge-making equipment. 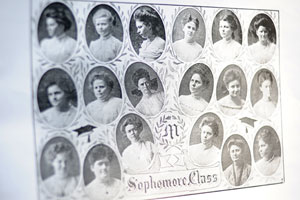 The 1908 sophomore class of the University of Montevallo was pictured in a yearbook, and one of the young women is Condie Cunningham. (Reporter photo/Jon Goering)

“They began rushing to put everything away,” Lowe said. “Alcohol fell on the carpet, and the flame caught on the back of Condie’s nightgown. She became hysterical and ran screaming down the hall.”

A faculty member living in the dorm extinguished the fire, but Condie passed away two days later.

“The ghost stories began not long after,” Lowe said. “Girls reported hearing screaming and moaning on the hall, and on the wooden door of her dorm room, you could see her face – eyes, nose and mouth with flames. We had to put the door away because it became such a curiosity.”

The second most famous ghost is that of Mr. Edmund King, the man who built King House in 1823. King House, or the Mansion House, is located on campus, and was considered a large house in its time, with glass windows and two stories. 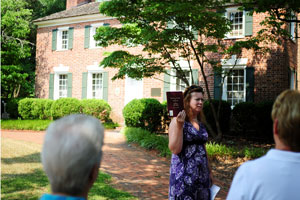 King and his wife, Nancy, had 10 children. He was alive when the Civil War started, and maintained a fruit orchard behind his house. Lowe said King would wander the grounds, the King family’s cemetery and the orchard.

“He would wander and carry a shovel and lantern,” Lowe said. “(After his death), the stories of the lights that shine at night began. People say they see lights and the curtains of the house move. They say he’s looking for the money and silver he buried in his fruit orchard. To this day, he’s seen with a lantern.”

The ghost walk was a part of the walking tours the Montevallo Chamber of Commerce is hosting during the month of June. The next walk will feature a behind-the-scenes tour of UM’s Palmer Hall on June 18. For more information, call 665-1519.