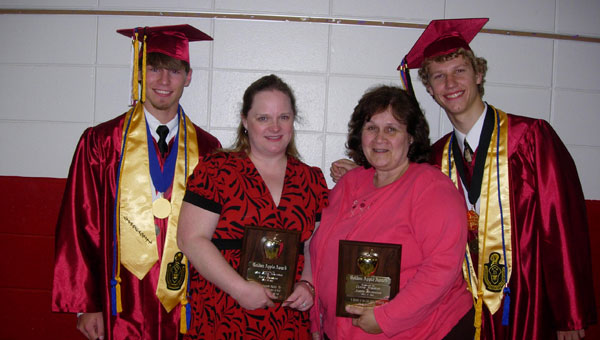 Several years ago, Shelby County High School’s counselor Donna Morris came up with the idea of an award for the senior class valedictorians to recognize a valued mentor who helped them in a special way to reach the top of their class. Morris called the award the Golden Apple.

Joseph Broderick, son of Penny and Cranford Blackmon (Wilsonville) and Stephen Broderick (Utah), and Trey Howard, son of Pam and Johnny Howard (Columbiana), were SCHS’s Class of 2011 valedictorians. These extraordinary young men graduated with over a 4.0 GPA with an advanced honors degree, won many honors, and thousands of dollars in scholarships.

“Ms. Wheeler helped me realize my potential in math and my passion for engineering,” said Broderick. “She helped me develop reasoning skills to see through problems and never give up until I find a solution. Ms. Wheeler has been a huge help in my life.”

Howard is an outstanding, goal-oriented scholar athlete. As a freshman, he set his goal to earn a 4.0 GPA for four years and also to excel in athletics, specifically baseball, which he did. Howard was treasurer of the National Honor Society, a member of the Beta Club, member of the All County Baseball team, the Lion’s Club Baseball All-Star team, and represented SCHS at the Alabama Governor’s School at Samford University. He will attend UAB to major in criminal justice and computer forensic science.

“I’m giving this award to Mrs. Stansell because she challenged me to realize that I can do anything I put my mind to,” said Howard. “She taught me to never back down, always put forth my best effort, and there will not be anything I cannot succeed in.”

Shelby County is blessed to have these fine young men and their extraordinary teachers.