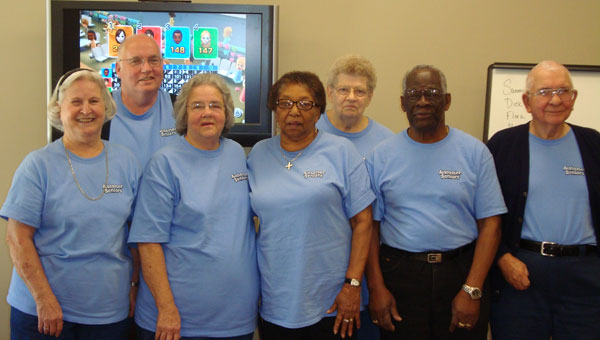 The stakes were high and the skill levels were higher as seniors from the Alabaster and Pelham senior centers battled each other in a Wii bowling tournament June 3.

The Alabaster seniors edged out the Pelham seniors for the win with a final score of 1149 to 1115.

Seniors from both cities spend countless hours each week preparing for these monthly tournaments.

“I think they’re great, especially when we win,” said Flora Oakes, of the Alabaster Senior Center. “Anybody we can get to play, we’ll take ’em on.”

Alicia Walters, Alabaster’s senior adults and therapeutic manager, said the popularity of Wii bowling has grown immensely since the center purchased the game system about 2 years ago.

“It started off slow, but then I couldn’t get them to stop playing,” Walters said. “Once they started playing, they really, really enjoyed it.”

Walters said Wii bowling is a safe alternative for anyone who cannot participate in strenuous physical activity.

“Everybody can play,” Walters said. “It is a wonderful game for a variety of folks (and) we will continue to provide it.”

Regina Jimenez, activities coordinator at the Pelham Senior Center, said the tournaments are more fun than they are competitive.

“They love to just meet the other seniors at the other place and play against them,” Jimenez said.

“We always have a good time,” Paxton said. “We always shake hands and have a cup of coffee and go on our way.”

Paxton said he has bowled a 300 sitting down and standing up.

“It’s the way you hold the instrument,” Paxton said. “A lot of people make fun of it, but there is some skill to it.”