Music center changes with the times 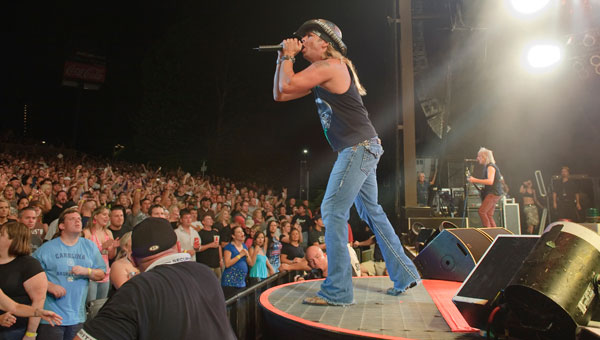 Since it was built in 1986, what is now the Verizon Wireless Music Center in Pelham has weathered several changes in the music industry, in the economy and in the population surrounding the venue.

When it was constructed, the music center, which was then known as the Oak Mountain Amphitheater, was a large outdoor stage and seating area surrounded on all sides by heavy woodlands and a few businesses.

Though it still lies in a primarily tree-filled part of Pelham, the center is now flanked by dozens of businesses on State Park Road, Alabama 119 and U.S. 31, and has seen the amount of residents living near it increase exponentially.

The changes over the years have also brought new challenges to the artists who perform at the venue and those who work to organize the shows.

“With iTunes and file sharing, I think that has really impacted the artists,” said music center General Manager Patrick Boone. “Now, they rely more on getting out and playing live shows to make money.”

Boone has witnessed firsthand the changes the music center has gone through during its past 11 years. During his time at the venue, he has done everything from preparing stage lighting to convincing big-name bands to choose Pelham over other southeastern music venues.

“When I started working here, I was just a stagehand. Over the years, I’ve been able to work my way up through the ranks to where I am now,” he said. “When I first started, all I really dealt with was getting the bands set up and taken care of once they got here. Now, I do a lot more of promoting the venue, working with the bands and the managing side of things.”

Even though Boone said the music center is the largest outdoor musical venue in Alabama, he said it can still be difficult to reel in some of the largest bands in the world.

“It can be a challenge. With the bigger bands, even though we are the largest (outdoor performing venue) in Alabama, there’s one in Atlanta that holds 20,000,” Boone said noting the Verizon Wireless Music Center contains about 10,500 seats. “It can be a hard sell, but you just have to work hard and build those relationships.”

This year, the center has already hosted big names such as Widespread Panic and Poison, and is set to host Motley Crue on July 9 and Lil’ Wayne on Aug. 5.

The nation’s down economy brought a few slow years to the music center, but things are starting to pick up this year, Boone said.

“The economy has affected a lot, including the artists’ ability to perform at a bunch of different venues and the fans’ ability to travel to the shows,” Boone said. “But I think it’s on the way back up now.”

Regardless of the nation’s economy, the venue routinely boosts the cash flows of its surrounding businesses.

“All of the hotels and restaurants around here are our best friends,” Boone said with a laugh. “Chic-fil-A will stop by once a month and get our schedule so they can staff accordingly.”