Melissa Oyer and Justin Brown were married at First Presbyterian Church of Alabaster on Saturday, May 7. The 6 p.m. ceremony was officiated by Rev. Chris A. Joiner, former pastor of the bride. Eric Watters stood beside Melissa as her man of honor and Toni Oyer and Rachel Church were bridesmaids. The groom¹s best man was Scott Rowe and groomsmen were Bruce Marchand, Steve LaMadeleine and Sam Smith. Nieces of the groom, Grace Padilla and Miriam Roper, served as flower girls.

The bride wore an ivory, strapless, Essence of Australia gown adorned with crystal beading. She was barefoot during the ceremony. Bridesmaids wore amethyst strapless dresses accented by handmade purple Cat¹s Eye necklaces, made for them by a friend of the bride. Flower girls wore ivory dresses and tossed purple and white flowers down the aisle. The groom and his attendants wore navy suits with purple paisley ties. 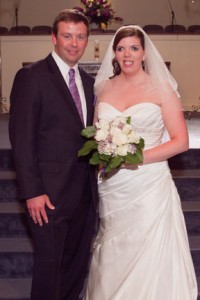 A reception followed at the Aldridge Botanical Gardens pavilion where guests enjoyed mint juleps, in honor of the running of the Kentucky Derby that day. The groom played guitar and sang his own version of the Allman Brothers Band classics, “Blue Sky” and “Sweet Melissa” as the bride danced with her father. Best man Scott Rowe performed a traditional Irish tune on the bagpipes.

The couple currently resides in Farmington, N.M., where Justin is employed with Public Services of New Mexico as a combustion analyst, and Melissa is employed as the special sections editor for the Daily Times. A honeymoon will be taken in Europe next year.

Cobb-Eddings Mary Elizabeth Cobb and Kevin Andrew Eddings were united in marriage on June 4, 2011 at 6:30 p.m. in... read more