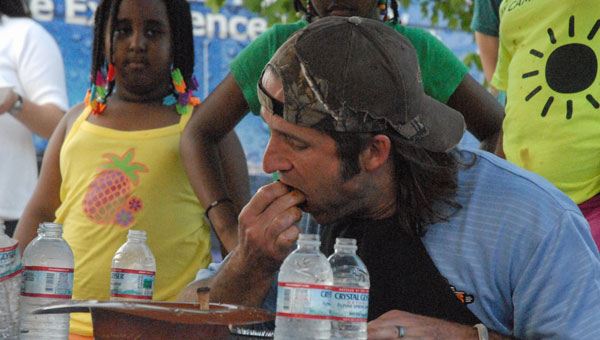 A Birmingham TV personality and a Pelham restaurant owner both ate two slabs of ribs in less than 15 minutes June 15 to take home top honors in a competition organized to help those hit by the April 27 tornadoes.

Clint Umphrey, manager of the Pelham Texas Roadhouse, which held the rib-eating contest to help raise money for the American Red Cross’ tornado relief efforts, finished in about 10 minutes.

However, Umphrey quickly said he would defer first place to the person who finished next, which led to a race among the remaining 10 contestants.

“I was just competing for bragging rights,” a wide-eyed Umphrey announced after finishing.

Al Ratcliffe, a Pelham resident and reporter with the CBS 42 television station, finished about five minutes behind Umphrey, and selected a golf package from Bent Brook Golf Course as his prize.

“I just had to keep going and try to keep from slowing down,” Ratcliffe said shortly after he finished. “If I don’t see another rib in my life, that will be fine.

“And by that, I mean I will probably be back here this weekend eating ribs,” Ratcliffe added with a laugh.

Each of the contest participants paid a $20 entry fee, which will benefit the Red Cross’ efforts to help Jefferson County, Tuscaloosa and other parts of Alabama struck by the devastating April tornadoes.

Music center changes with the times