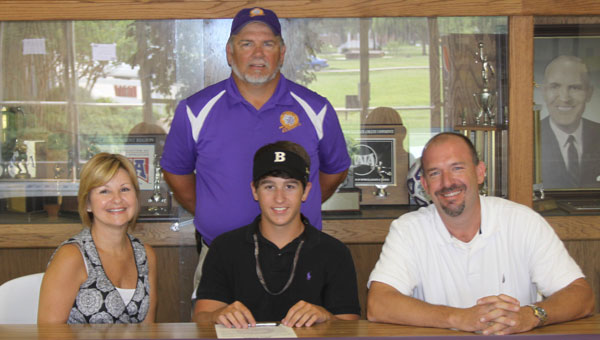 Thompson High School graduate Tanner Ellis spent a majority of his time at a local fishing hole during his childhood.

Ellis never imagined his outdoor activities would provide scholarship money toward his college education one day.

However, that day came recently when Ellis signed a partial athletic scholarship with Bethel University in McKenzie, Tenn., to join the Wildcats’ bass-fishing team.

“I don’t see how it could get any better,” said Ellis, Thompson’s first ever bass-fishing signee. “It’s all a huge blessing.”

Ellis said he’s glad to see the tour, which increased from 20 teams during the 2010 season to more than 80 this spring, getting more notoriety.

“The sport has grown so much,” Ellis said. “More people are paying attention and getting on board.”

Ellis will participate in the High School Fishing World Finals for the second consecutive year next month. Ellis and his co-angler Austin Herring, earned a spot following their success this spring in state tournaments.

“It’s a lot more fun,” Ellis said. “You’re fishing with people from all across the United States.”

Ellis, who plans to major in business, is the son of John and Jerri Gray of Alabaster.

“Tanner is a fine young man and a great angler,” Mason said. “His ability to fish Southern lakes in the (United States) we compete in will add a huge addition to our program. We are excited he is going to be a member of our Bethel family.”

Different paths lead to Player of the Year