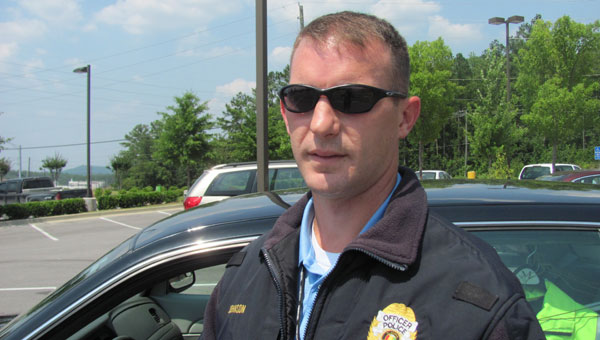 Alabaster police detective Paul Johnson has been serving with the department for several years, and is preparing to graduate from the University of Montevallo. (Special/Sandra Thames)

Born at a Birmingham hospital but raised in the Montevallo area, Paul Johnson is a well-known name.

From years of little league, men’s softball, football at the University of West Alabama in Livingston and then back home to attend the University of Montevallo, Johnson has always been a versatile Christian man. At the age of 7, Johnson was baptized by Brother Mike Shaw at Pelham First Baptist.

Whether he was a student, pizza man, route salesman, flooring installer or cell phone representative, Johnson always tried to give his best to every job. At each job in his life he felt he was where God wanted him at that time.

Having met his wife-to-be, Stephanie Kiker, at the old Ropers in Hoover, dating for a couple of years and sharing common beliefs, Johnson was content to live payday to payday like he thought the rest of the world lived.

By the way, Paul Johnson has never tasted alcohol and Stephanie noticed him enjoying the music at Ropers with his usual Coke.

On a Wednesday night, April 8, 1998, the Johnson’s were at Open Door Church when an F-5 tornado hit.

The 70 people who walked out of the destroyed building had a new appreciation for life.

In 2008, Johnson filled out an online application to apply for one of two advertised positions with the Alabaster Police Department. He was graded, interviewed and attended the 12-week Police Academy in Tuscaloosa.

Beginning duties included “jail duty,” where the calm, courteous manner of Johnson caused one of the inmates to ask him where he attended church. Johnson said “Westwood,” and the inmate yelled out to the other inmates, “I told you he was a Christian.”

Johnson said the fact his actions and words had convinced someone that he (Johnson) exemplified Christian qualities, well, that just “made his day.”

Four months ago, Johnson was promoted to juvenile detective for the city. He loves this rewarding job and hopes daily to affect the lives of troubled young people in a positive way.

By catching the offenders early and putting them on the right track perhaps in the long run he could be saving their lives.

Johnson loves coaching (baseball and football), hunting and singing. His long-term dream is to be debt free, raise great sons, be the best Christian husband, father, son, brother and friend he can be. “Follow God’s clues — He will guide you,” he said.

Johnson loves Charleston, S.C. and would love for he and Stephanie to have five days alone there. Sons Levi, age 12, and Landon, age 8, attend Thompson schools.

In the next two years, Johnson will finish his senior year at the University of Montevallo and get that elusive degree. He hopes to always live in Alabaster and retire with the Alabaster Police Department. No plans for the big city detective business.

“I prefer smarter to harder,” he said. “But don’t mind getting down and dirty.”