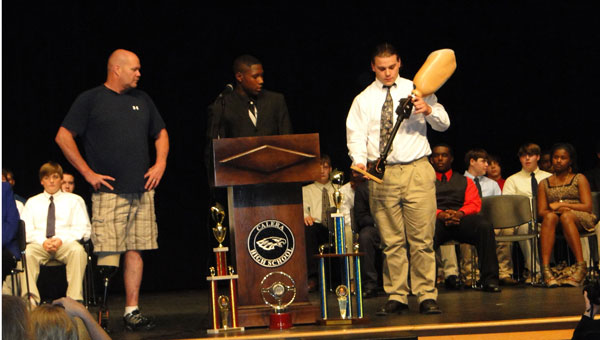 In an awards ceremony at Calera High School on May 17, Engineering Applications teacher Brian Copes stood before parents to thank them for allowing him to teach a group of students who designed a prosthetic leg using inexpensive automobile parts.

“We’re here to recognize and honor these kids for their accomplishments,” Copes said. “What they’ve done is extraordinary ­— an outstanding job — and I’m thrilled to have each one of them in my class.”

Attendees stood for the presentation of colors and observed Greg Garner, who wore the prosthetic, walk alongside the color guards.

Alabaster’s Next Step Prosthetics owner Adam Williams spoke of his involvement in the project.

“Mr. Copes invited me about a year ago to get involved with the BUV project that’s been ongoing for several years. Then he asked me to get involved with a new project, designing an artificial limb that would be applied to individuals in third world countries who would otherwise not have the opportunity to walk. Brian’s idea to take a basic component and turn it into a prosthetic seemed kind of crazy at first, especially when he said he planned to use Toyota Corolla parts,” Williams said.

When Williams first met with students, they discussed how components taken from the salvaged vehicle could be used. He explained to them the mechanical principles of aligning a prosthetic to allow the recipient to walk properly.

Returning several months later, Williams found students had made a prototype using motor mounts for the ankle and knee joints. Williams was “absolutely taken by the innate stability” of the design. Something that takes millions of dollars and years of education to create, these students “just happened to do.”

Lt. Governor Kay Ivey energetically strode to the mic and asked students and parents to understand, to see, what can be done when we all recognize “what we are is God’s gift to us. But what we become is our gift to God.”

As a former teacher, Ivey related to the passion of students learning and excelling at high standards. She noted their accomplishment and recognized the commitment of service to their fellow mankind. Words of praise gained her applause, but she brought the house down with these inspirational words:

“Calera Eagles — you soar! And I’m proud to be among the soaring students at Calera High School. You chose your mascot not by accident. Eagles… aaah… freedom!”