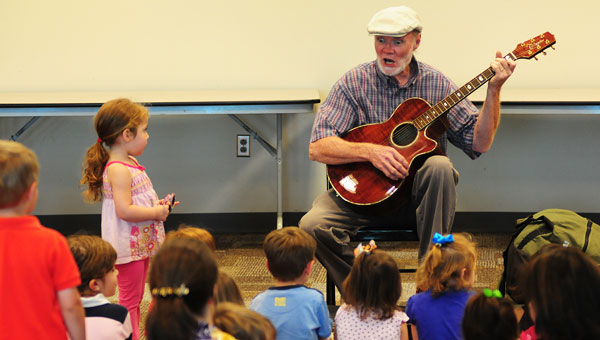 When Phil “Mr. Mac” McEntee entered the room through a side door, a number of wiggling, excited toddlers immediately stood and formed a semicircle around the folding chair positioned in the front of the room. Clapping began, children quieted and Mr. Mac, storyteller extraordinaire, pulled out his guitar.

Sixty-year-old McEntee travels weekly to a number of Shelby County libraries to sing, rhyme and tell stories to rooms full of local children. With his ponytail and wide, expressive eyes, McEntee has the unique ability to capture the attention of squirming children with just a guitar, story or puppet.

“I can’t explain it,” McEntee said. “Even when I’m in a store and see kids I’ve never met, the kids will connect with me.”

McEntee was a public school music teacher for 27 years. He taught in Bessemer and Birmingham, and concluded his career by teaching kindergarten through fifth graders at Epic Elementary School in Birmingham. He said he would still be teaching at Epic if the drive to Birmingham wasn’t so long.

While he’s been retired from teaching for 15 years, McEntee has been “Mr. Mac, storyteller extraordinaire” for 35 years.

“I was teaching and my wife was in nursing school,” he said. “I needed a job. I even had a job application in at Arby’s. A librarian friend of mine told me she needed a storyteller in her library. I had to try out. I got the job, and it paid better than Arby’s.”

McEntee, a Montevallo resident, visits five to six libraries a week, including the Parnell Memorial Library in Montevallo, the Albert L. Scott Library in Alabaster and the North Shelby County Library.

“It’s just a chance for kids to be kids,” he said. “The format I use has worked for a long time. It’s not terribly structured and just lets them be kids and dance around if they want to.”

Jason Alexander, general manager of the Lee Branch Zaxby's since its 2007 opening, led the store to a Golden Zeggy... read more