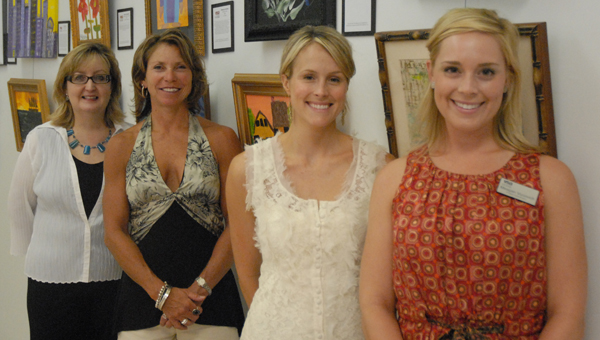 The Shelby County Arts Council held an artists' reception June 24 for the VSA Arts of Alabama Exhibit, on display through July 28 at the arts council gallery. Pictured during the reception are (from left) Patty Lovoy, executive dirctor of VSA arts; Terri Sullivan, president of the Shelby County arts council board; Susan Gordon, the art council's director of arts and education; and Meagan Vucovich, program director for VSA arts. (Reporter photo/Brad Gaskins)

COLUMBIANA – The Shelby County Arts Council held an artists’ reception June 24 for a traveling exhibit showing the work of disabled children and adults.

The VSA Arts of Alabama Exhibit is on display through July 28 at the art council gallery.

“Our artists love being able to be shown in Shelby County, because it’s obviously such a hot part of the state,” said Patty Lovoy, the executive director of VSA arts.

From Shelby County, the exhibit travels to the Walker County, Huntsville and the state capitol in Montgomery.

“It’s a prestigious exhibit,” said Terri Sullivan, president of the arts council board who also volunteers as the council’s interim executive director.

“It receives a lot of recognition at different galleries,” Sullivan added. “We’re really fortunate that we’re able to bring that into our community to let people see the work that they’re doing.”

The arts council has programs for students with disabilities in 16 public schools.

“It’s nice to be able to see work that older kids and adults are doing, similar to what we’re doing with the younger children,” Sullivan said. “Hopefully, they’ll be doing that one day too.

“The work is beautiful,” she added. “Some of it has already sold. It’s definitely worth the trip to see it.” 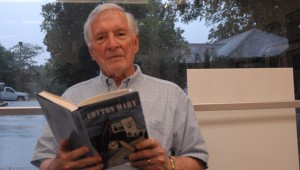 “Cotton Mary” is about an uneducated female mill hand and her struggle to balance family and work and mid-life challenges in the mid 20th century.

Limited edition copies were sold for $35 at the reception. All proceeds were donated to the arts council. The novel is available at lulu.com and will soon be available amazon.com and other online retailers.

Whetstone, a retired college professor, has also written “Crystal Angel,” a fictional account of racial controversies surrounding the church, and “Goober Joe,” a young adult novel about a mixed-raced slave’s risky relationship with an escaped Union prisoner toward the end of the Civil War.