A relatively new resident to the Alabaster area, Wendy Brooks Patton feels right at home. After Patton’s husband took early retirement last May (from Dallas) they moved into their new home just off Smokey Road.

Wendy’s husband, Randy, is originally from the Birmingham area. A niece was working for Dr. Benjamin Crunk and told Patton of a hygienist opening.

Her profession has sort of grown on Patton. She baby-sat for the first dentist she ever worked for, and he trained her as a dental assistant. After high school, Patton went to St. Petersburg College for her associate degree in dental hygiene. She has been a licensed hygienist for nearly 30 years.

She and husband Randy met at the dentist’s office in Tampa. He was “supposedly” her patient. It was a set up by a friend, and it worked well, too. In two months, they were engaged and married after nine months. They are parents of daughter Emily, a nurse in Birmingham, and son Ryan, married and a nurse in Fayetteville, Ark.

Pattons’ widowed Mom and one older brother reside in North Carolina. Because their family is so spread out, family get-togethers for visiting and catching up are a favorite on Patton’s list. Sharing simple pleasures, being outside, bird watching, gardening and crafting are favorite interests and hobbies. 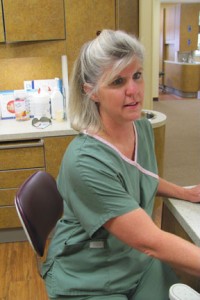 Someday, Patton hopes she and her husband will be able to travel. Greece is high on their list because of its people, culture and architecture.

An outgoing people person, Patton is a wanna-be country girl with a positive outlook on life. The favorite part of her job, according to Patton, “I especially like to work with people who have dental anxieties and help them conquer their fears. I love to educate the patient and especially enjoy working with children. I often times clean G.I. Joe or Barbie before the actual patient.”

Patton is very attractive, smiles all the time and is easy to talk to. It’s kind of like you’ve always known her. She fits in well at Dr. Crunk’s with all the laughter, compassion and family atmosphere.

I hope the Pattons find all the happiness they deserve in Alabaster.

Alabaster police detective Paul Johnson has been serving with the department for several years, and is preparing to graduate from... read more