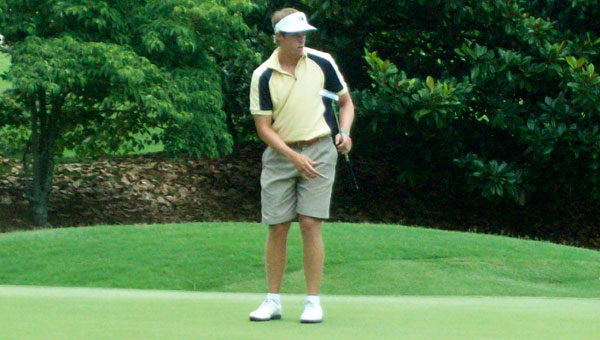 Georgia Tech University rising junior Bo Andrews follows his putt during the final round of the 2011 Greystone Invitational tournament June 26 at the Founders Course at Greystone Golf and Country Club. (Reporter Photo/Wesley Hallman)

HOOVER — Georgia Tech University rising junior Bo Andrews made up a couple of strokes in his final round to claim the 2011 Greystone Invitational championship June 26 at the Founders Course at Greystone Golf and Country Club.

Andrews, who entered the final round of the 11th annual Invitational in a two-way tie for second place in individual standings, carded a 3-under par in the fourth round to capture the tournament championship. Andrews finished with a tournament total of 6-under par 282 in the Invitational.

Elmore held the lead entering the final day of the tournament before carding an even par 72 in the final round.

Coastal Carolina University rising sophomore Conner Pratt, a Spain Park graduate,  finished in a four-way tie for eighthin the Invitational with his 3-over par 291.

Former National Football League star and Spain Park High School boys’ golf coach Al Del Greco finished in a two-way tie for 43rd overall with his 14-over par 302. Del Greco entered the final round in the top 15 in individual standings before carding an 11-over par 83 in the final round.