Calera students, staff work to take care of their own 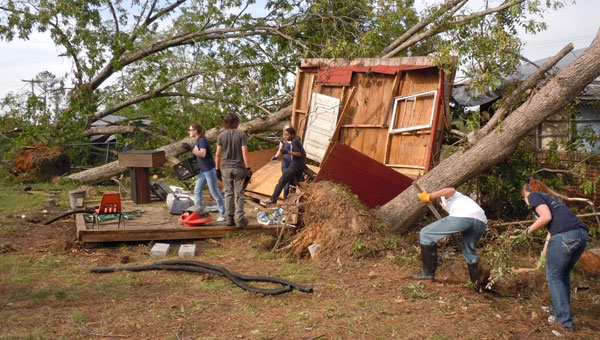 When tragedy strikes, the first to respond is family or those who are like family. When the home of Calera High School’s custodian Donald Liffridge was damaged during the April 27 storm, school administration, faculty and students came to his rescue.

An announcement was made that Liffridge’s Pratt City home suffered damage and nearly 200 students signed up to participate in a service project to help him and his neighbors. Forty-four students, chosen by teacher recommendation, boarded a school bus, taking with them bottled water, clothing, canned food, hygiene products, paper products and other non-perishable items.

Algebra 1 teacher Melissa Ellison was on the bus. She shared how students responded as they approached their destination.

“Students were talking and listening to their iPods on the way. When we approached the damaged area, silence filled the bus,” she said. “Some started whispering things like ‘look over there,’ ‘my gosh,’ ‘look at that.’ They had seen pictures, but seeing it in person was so different. The atmosphere became very solemn.”

Ellison said she was impressed with how students maximized their time and stayed on task. At the end of the day, students did not want to leave. They begged to stay in order to finish clearing trees off Liffridge’s backyard shed.

“The community thanked us so many times,” Ellison said. “It was extremely humbling — we all need that at times. We got way more out of it than Donald and his neighbors.”

On the way back, students ate sandwiches prepared by the lunchroom staff. Ellison said there were no complaints, all of them were truly grateful for what they received.

Lunchroom worker Angel Davis has friends who live close to Liffridge. Students walked to their house and cleaned yards on the way. Davis was told “those kids showed up and showed out.”

On Awards Day, Liffridge shook each hand that helped and presented service certificates. He choked up as he told me how his neighborhood has been strengthened because of the care they received. “My neighbors and I are very grateful for the help. To the very last day of school students came to me and asked if we needed anything. They were truly concerned.”