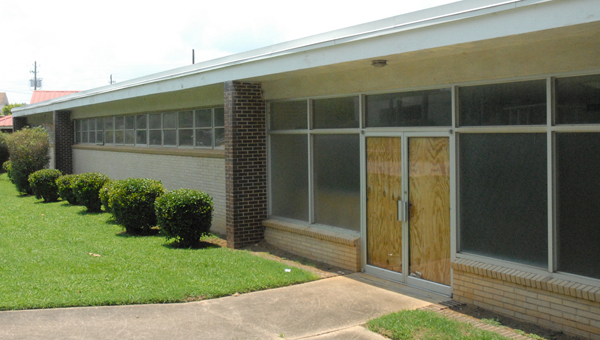 The city of Columbiana will hold a public hearing Thursday at 10 a.m. to discuss renovating a county-owned building on Mildred Street into a Columbiana senior center. (Reporter photo/Brad Gaskins)

COLUMBIANA – The city of Columbiana has scheduled a public hearing Thursday to discuss renovating a county-owned building on Mildred Street into a Columbiana senior center.

The hearing, at 10 a.m. at the Columbiana Recreation Building on Washington Street, will cover the scope of the project and an Alabama Department of Economic and Community Affairs grant the city is pursuing to help pay for it.

The county-owned building was once occupied by the Shelby County Health Department, until the health department moved to a newer facility in Pelham. The building most recently was used to hold county and state court records.

The building is located across the street from Columbiana City Hall, at the corner of Mildred and Milner streets.

An agreement between the city and the Shelby County Commission would make the building available for the city to locate a senior center there, Columbiana Mayor Allan Lowe said June 27.

As part of an agreement, a portion of the renovated building would be used as a conference room for local agencies, organizations and groups to meet, Lowe said. In addition, the health department could locate a satellite office in the building to provide basic health services to residents.

Lowe, who has pushed for the project for several years, praised county leaders for what he said was their continued support for Shelby County seniors. Lowe also praised county development services personnel for their expertise throughout the renovation process.

“In 2003, the city renovated the Columbiana Recreation Building, and part of that renovation was a very nice senior activities suite,” Lowe said. “Over the next year, the average daily attendance tripled, and our seniors quickly outgrew the space we dedicated solely for their use.

“I promised the seniors that I would find a way to give them the facility they deserve. With the county’s help, and with the approval of the city council, I’m going to be able to honor that promise.”

The deadline for the ADECA grant is August 1.

The crowd gathered at Wilsonville Baptist Church on Sunday night listens to gospel singing as part of Wilsonville's God and... read more