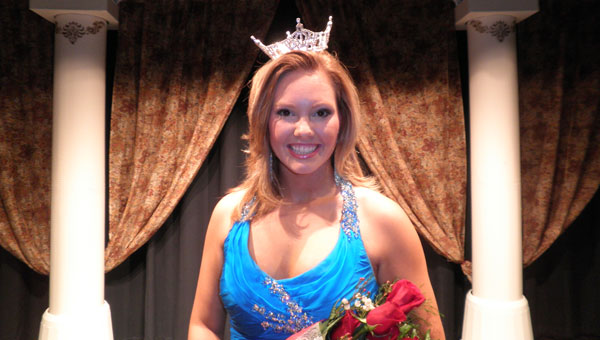 The reigning Miss Shelby County 2011 Megan Picklesimer will crown her successor on Friday, July 22, 2011 at a “Night at the Cinema.”

Picklesimer is from Chelsea and attends Troy University, where she majors in broadcast journalism and minors in public relations.

Miss Shelby County is a preliminary pageant of Miss Alabama and Miss America, the largest scholarship organization for young women in the world, giving more than $45 million since its inception.

For the first time, the pageant has opened beyond Shelby County for contestants to live, work or go to school in Shelby’s surrounding counties: Chilton, Jefferson, Talladega, Bibb, Coosa and St. Clair. Contestants must be between the ages of 17 and 24.

The Community Service award will be given to any contestant for their community service work.

Troy University is awarding a renewable four-year scholarship, given to all contestants that qualify.

In the last three years, Miss Shelby County has awarded more than $36,000 in scholarship money, tuition grants and gifts.

The Vignette Club, a group of 38 women from south Shelby County, has produced the Miss Shelby County Pageant for 24 years. The club is a member of the Alabama Federation of Women’s Clubs.

The members solicit sponsorships for the pageant and scholarship money to award to the winners. They also sell ads for the Miss SC Program. Ad money and ticket sales are donated to support local schools and non-profit community organizations.

Contestants will attend a get-acquainted tea party on Tuesday, July 12, 2011 at 5 p.m. There is one required rehearsal on July 21, 2011 at 6 p.m. Interviews will be held on the afternoon of July 22 at Shelby County High School with the pageant beginning at 7 p.m. that night.