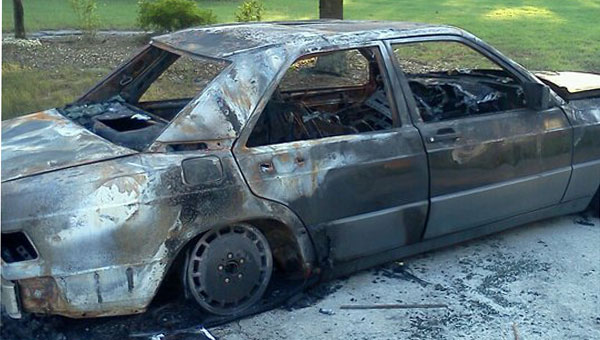 CHELSEA – At 2:30 a.m. on Tuesday, June 28, Terry and Karen Stough were awakened by what Karen described as “a light shining into our house.” After taking a closer look, however, the Stoughs realized that Karen’s 1991 Mercedes was engulfed in flames.

“Someone broke into my husband’s car (which was located next to the Mercedes), and had stolen things. They were also robbing my car,” Karen Stough said. “I don’t know if the fire was on purpose or a result of them trying to steal the stereo.”

The Stoughs live in Chelsea’s Hunter Hills, a neighborhood located off Shelby County 36.

“I always thought it’s a nice, little crime-free neighborhood, and I still think that,” Stough said. “My little world was rocked by (the fire).”

The Stoughs called the Chelsea Fire Department, and Captain Adam Reeves was one of the fire fighters who arrived on the scene. The Shelby County Sheriff’s Office also assisted the Stoughs.

“Around 2 a.m., we got a call to a vehicle fire in Hunter Hills,” Reeves said. “When we arrived, one vehicle was fully involved with another vehicle right next to it. It received some radiant heat damage. We just extinguished the fire. As far as I know, the car next to it was cosmetic damage. The car that was originally on fire, there was nothing left.”

Stough said she was thankful the Mercedes was the car parked furthest from the house, as the house itself sustained no damage. Due to Terry’s car’s close proximity to the burning Mercedes, however, both cars were totaled. 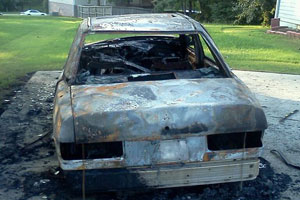 Karen Stough said the fire melted the tires and totaled both her car and her husband's. (Contributed)

“The tires were melted, and the inside was just a twisted mass of metal,” she said. “Whoever did this needs to be held accountable. I’m torn between asking if this person did it deliberately or not. What kind of person leaves a car burning right by someone’s house? It’s a complete disregard of life.”

Anyone with information on this incident is asked to contact the Shelby County Sheriff’s Office at 669-4181.

By CHRISTINE BOATWRIGHT / Staff Writer WESTOVER – While the city of Westover has utilized a website for years, a... read more