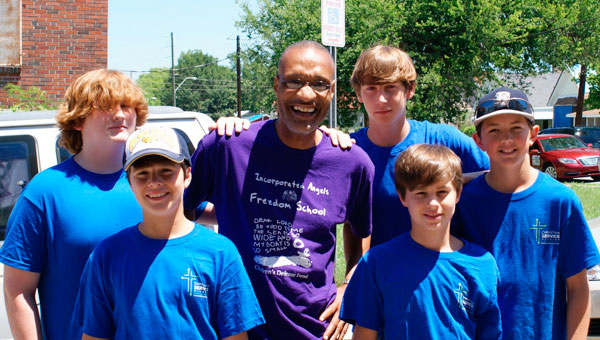 When Evangel Classical Christian School SCRIP coordinator Donnalee Blankenship decided to help organize a program to help those hit by the state’s April tornado outbreak, she had no idea how many donations she would receive from people all over the nation.

Through the school’s SCRIP program, Blankenship encourages ECCS parents and supporters to purchase gift cards from area retailers. A portion of the gift card sales proceeds is then donated back to the school.

After the April 27 tornado outbreak, Blankenship asked representatives from the national SCRIPS organization if they would be willing to help the state’s storm victims.

“I called SCRIP, and they contacted all of their customers across the country and asked them to start collecting gift cards to help the storm victims,” Blankenship said.

Soon after the national organization sent out the request, thousands of dollars worth of gift cards to common retailers, such as Target and Walmart, began pouring in.

“For example, we got $1,500 worth of gift cards sent to us from a high school in California. There is just story after story of people we don’t even know sending these huge donations to us,” she added.

Over the past several weeks, groups of ECCS parents, students and supporters have made trips to hard-hit areas, such as Pratt City and the Webster’s Chapel community, to distribute the gift cards to those in need and help with recovery efforts.

“We asked for gift cards for nationwide chains, because we knew no matter where people are, they will have one near them,” Blankenship said. “While our groups have been up there, they have run into groups from Florida, Tennessee, Ohio, everywhere. It’s amazing to see how many people are still taking weeks and months off to help out.”

Anyone interested in donating gift cards, or helping to distribute them, can visit Neighborproject.blogspot.com or Evangelclassical.org/wordpress/?page_id=1605.

To read comments from those who have sent gift card donations from across the country, click here.