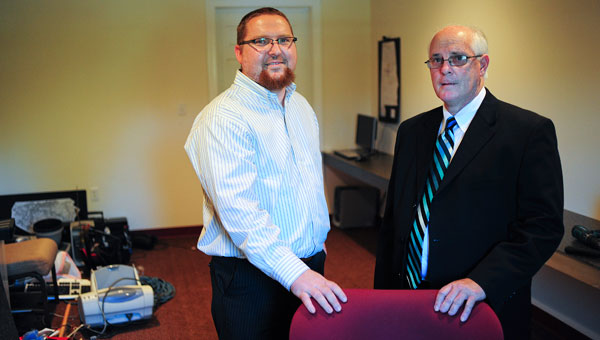 COLUMBIANA – Tech-savvy Gerald King owns his own wireless network company and, as a church member of the Apostolic Truth Center in Columbiana, decided he wanted to contribute his skills and resources to the community through the church.

“As a church member, I wanted to invest in this community,” King said. “I did a marketing survey, and it told me ‘Don’t invest here; it’s not worth it.'”

King took those results personally and saw them as a challenge. He’s donating 15 computers to the Apostolic Truth Center’s new resource center, along with a high-speed, laser-jet printer, scanner and copier.

The center will offer computer teacher-led classes for community members. King said he’s offering resources to teachers from Vestavia and Hoover to have them come to Columbiana once or twice a week to teach computer classes.

“(The computer center) will be used to educate people. We’ll teach them how to write resumes, how to power on a computer,” King said. “A lot of people homeschool their kids (in Columbiana) and don’t have the Internet at home.”

In addition to providing free job resource classes and a place for homeschoolers to access the Internet, King said he worked to have the center certified as a testing center for professionals.

He said real estate and insurance professionals have to recertify their licenses every year, and now they can utilize the Apostolic Truth Center’s new computer lab to do so.

King is setting up the center so community members don’t have to pay a dime to utilize what the center will offer. He said the software would already be installed on the computers and available for use.

“The center benefits the church too. We’ll get more people in the door, and if they have questions, (the pastors) will be right here,” King said. “We’re trying to help educate people and raise the value of themselves. A lot of people don’t have the technology, especially in Shelby County.”

The computer center is still under construction, but King said he’s hoping to have it complete by the end of the year. For more information, contact the Apostolic Truth Center at 669-0075.

Eagles and Lions compete in 7-on-7 passing camp