VINCENT – In 1984, Vincent dairy farmer Harold Miller bottled his own milk. He began to sell the milk in a small store he built on his property. He soon realized, however, that he was selling more cheese than milk. Therefore, Harold built Miller’s Cheese House with his own hands in 2005.

Signs for Miller’s Cheese house guide customers to Shelby County 467, a winding highway deep in the heart of Vincent.

According to his son, Tim, Harold wanted to build a store on U.S. 280, “but us Millers are cheap,” Tim said. “So we’re stuck in the middle of nowhere, but people like to see the scenery.” 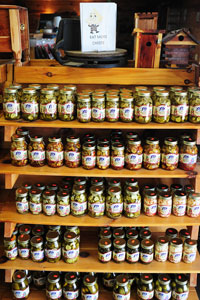 Harold got out of the dairy business in 1992. Tim said the dairy was financially profitable in the 1980s, but as the dairy continued, there was no money in the business. Harold began to acquire 15-pound blocks of cheese and cut them down to sellable portions. 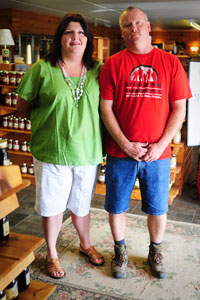 “The coughing sounded like a horror movie,” Tim said. “We lost 80 cows in one day. It really did us in.”

“The milk comes from Amish farms. They take care of their cows and watch what they’re being fed,” Tim said. “It’s the same with the jams and butter.”

In addition to selling Amish food, including pickled beets, a customer favorite, Tim said 80 percent of his business is to flea market vendors.

Harold, 74, is now “semi-retired,” but continues to make cedar furniture, including chests and porch swings, to sell at the store.

“He calls them ‘snowflake chests,'” Tim said, “because none of the cedar chests are built the same.”