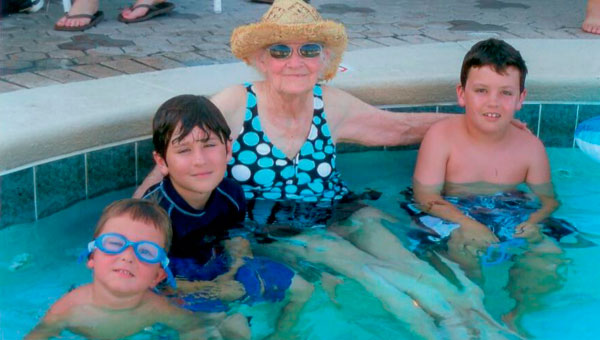 Opal Corn and three of her great-grandchildren enjoyed spending time in the hot tub last summer during a family vacation to Panama City, Fla. (Contributed)

Opal Outlaw Corn was a gifted seamstress, a refinisher of antique furniture and a harmonica player. She passed away at the age of 92, but she was still always raring for an adventure, her daughter, Denise George, said.

“The amazing thing to me about Mom was she always looked for the next adventure,” George said. “For her 80th birthday, she climbed on my horse. We have a picture with her holding a turkey. She didn’t shoot it with a gun, but hit it with her car. She then brought it home and cooked it.”

Mrs. Corn was born in 1918 in McKinnon, Tenn. Her parents moved their eight children to Central Park, Ala., near Birmingham when Mrs. Corn was a child.

“She lettered in all sports, and the Alabama School for Women (now the University of Montevallo) tried to encourage her to come to the college in 1935,” George said. “She was in love with my father, and I don’t know what the circumstances were, but she chose to marry my dad (instead of going to college).”

George said the only new piece of furniture her parents bought was a piano for their daughter. George is now a piano teacher in Montevallo.

“I wanted to dance, but Mom wanted me to play the piano. She told me, ‘You can glorify God longer by playing the piano.’ She sacrificed for me to have that piano,” George said.

Mrs. Corn and her husband, Ervin, moved to Montevallo 16 years ago, and her husband said it was the “greatest town and (they) should’ve made the move long ago,” George said.

Mrs. Corn was a member of Montevallo First Baptist Church during her years in Montevallo.