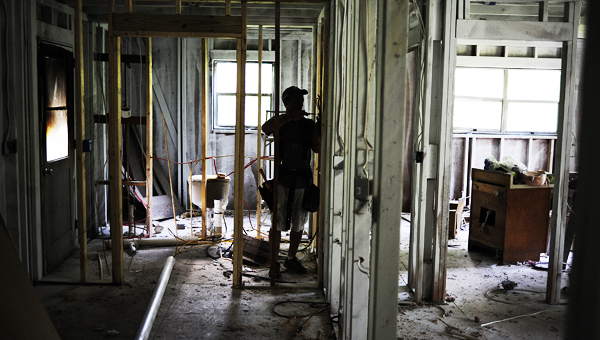 Travis Blankenship lends a hand to help Alesia and David Isbell rebuild their home after a fire destroyed much of the house. (Reporter Photo/Jon Goering)

When Alesia Isbell and her family wake up in their Alabaster apartment each day, they can only think of one thing – getting back home.

In October 2010, Isbell was preparing to take a load of clothes out of her dryer in her house on Scurlock Road in Helena when she heard a distinct popping noise. When she looked upward, she saw flames billowing up to the ceiling.

The Helena and Alabaster fire departments were able to contain the fire before it destroyed the house, but severe interior damage had already occurred.

“At least we had the structure still up,” Isbell said, noting nearly everything inside the house was damaged by smoke and fire.

In one day, the Isbells’ home for more than 25 years was made unlivable. But the worst news was yet to come. 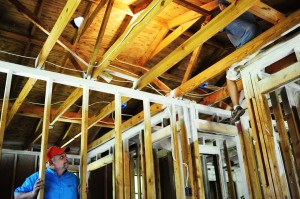 David Isbell chats with Travis Blankenship as he helps to work to rebuild the family's home in Alabaster. (Reporter Photo/Jon Goering)

When the family contacted their insurance company, they learned their policy would cover paying off the house’s mortgage, but would not fully fund repairing the house.

“I didn’t know we were underinsured until then,” Isbell said. “Everything has been crazy since then. It’s been hard.”

The family was forced to strip the interior of the house down to its wooden frame, remove the carpet and walls and scrap nearly every major appliance in the home.

Because their Helena house was uninhabitable, the Isbells tried living with family in Chilton County for a while, but soon moved into Alabaster’s Woodbrook Trail apartment complex.

“It’s hard renting, because that was our home. I was born and raised in Helena, and I had lived there all my life,” Isbell said.

The family began working to slowly replace what they could, and got help from a relative to re-wire the home’s electrical system. But as the months wore on, the Isbells finances grew thin.

“Right now, we are pretty much at a standstill. We are about to wear ourselves out trying to pay for all this,” she said.

Now, the family is reaching out to their neighbors for help to purchase the materials necessary to complete repairs on their house.

“I’m not asking for people to just bring us money,” Isbell said. “We just want help to get back home.”

The family’s biggest needs now are materials, such as sheetrock, flooring and windows.

“If we could just get some help in getting materials to rebuild, it would be the biggest blessing you could imagine,” she said. “We would certainly be thankful.”

For more information about the rebuild, or to donate to the family, call Alesia or David Isbell at their apartment at 663-7051.

By CHRISTINE BOATWRIGHT / Staff Writer MONTEVALLO – The University of Montevallo is looking to hire a new chief of... read more