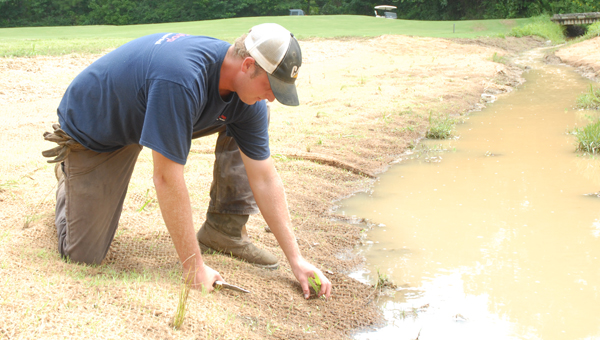 CALERA – A stream running through Timberline Golf Course is getting an environmental facelift.

Work began last week and is being funded through a $40,000 Alabama Department of Environmental Management 319(h) grant, and is part of the Buxahatchee Creek Watershed Restoration project, an ongoing effort for the last two years in north Chilton and south Shelby counties.

The unnamed stream “drains both sides of Highway 25 going east towards Columbiana,” said Glenn Littleton, coordinator for the Buxahatchee 319 project.

“We’re looking at reducing erosion in the channel, helping to prevent dirt from getting into the pond out here (at the golf course) and also protecting the banks to help prevent fertilizer from getting into the water,” said William McLemore of Goodwyn, Mills and Cawood, which designed the stream project at Timberline.

Flood plains are being constructed in areas of the golf course that are out of bounds for play. 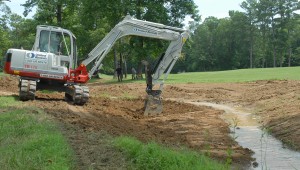 “We’ve gone in and basically cut the earth down a couple feet,” McLemore said. “In a rain event when the water starts to come, it’s able to spread out on these constructive floods plains. Right now, that water is just screaming into the pond.”

When the water rises on the flood plains, its energy and velocity will decrease.

“Before, there were a lot of hairpin turns, and that was adding stress to the banks, causing erosion and causing the sediments on the bank to fall into the water,” McLemore said. “By realigning this and reshaping the channel and the slopes of the banks, it’s going to reduce that stress, prevent erosion from occurring and keep that sediment out of the water.”

One Stop Environmental, a Birmingham-based firm, is doing the construction work.

Patrick Bright, of One Stop Environmental, said the project is progressing better than expected, and added Timberline has been great to work with.

Common rush, cardinal flower and blue iris are being installed in the flood plains, Bright said.

Cawaco RC & D is providing financial management for the project.