The sky’s the limit for 17-year-old pilot 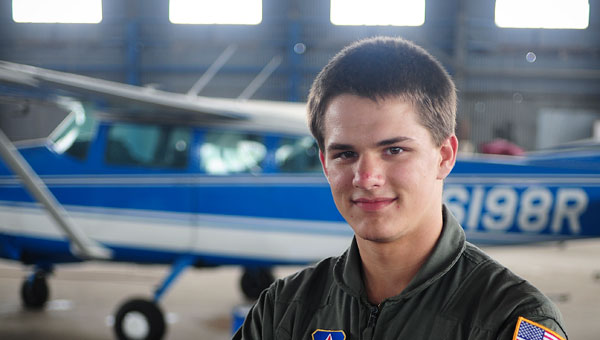 While most people his age just learning to drive, 17-year-old Jacob McGowin already has his pilot's license. (Reporter photo/Jon Goering)

By DREW GRANTHUM / For the Reporter

Most 16-year-olds are car crazy. They spend their time practicing to earn a driver’s license, saving money to buy their first car or working a summer job to put gas in their tanks.

For Wilsonville’s Jacob McGowin, the age of 16 meant he could finally fly solo on his way to earning a pilot’s license.

That’s right — McGowin was flying in a plane by himself at an age when most are mastering the 3-point turn.

In June, McGowin became the first member of his family to hold a pilot’s license at just 17.

“I’ve wanted to fly as long as I can remember,” he said. “When I was younger, I remember thinking ‘Well, maybe I can’t fly now, so what can I do to be around pilots?’

“I wanted to be around them, to ask about what it takes to learn about flying. I had things like flight simulators, but it’s not the same.”

While most parents might encourage their child to wait until they were older to learn to fly, Jacob’s father Barry said he never thought twice about his son taking to the skies.

“He’s very meticulous,” said Barry McGowin. “He’s done very well and was studying how to fly way before he could ever take lessons.”

When he became old enough, Jacob McGowin joined the Chilton County Composite Squadron of the Civil Air Patrol. The CAP, which is an auxiliary of the U.S. Air Force, has three main objectives: search and rescue, cadet training and aerospace education.

“In that order,” said McGowin, who is a Second Lieutenant, Cadet Commander with the organization. “Overall we do 95 percent of all inland search and rescue. Whenever a missing aircraft indicator goes off, we’re notified.”

Those who are involved with the CAP noticed McGowin’s desire to learn about all things aviation.

McGowin said one of the most difficult things about flying as a hobby is the expense involved.

“Money’s an issue,” he said. “It’s $4.99 for a gallon of fuel. It doesn’t make it impossible though. I think if more people tried flying they’d say it was worth it.

“It’s a lot like anything else: if you go in with an open mind, it can be fun. A lot of people have bad experiences with commercial flights, with security and turbulence. If more people tried flying in general aircraft, they’d like it.”

Those who have ridden with Jacob say he shows great control in the cockpit.

“I rode with(Jacob and Barry McGowin) to an FAA Safety Seminar at Bessemer Airport,” said Masterson. “I was in the back seat with Jacob flying, and his dad in the co-pilot’s seat for both the day trip up and the night trip returning, and was never uncomfortable. The young man is good.”

McGowin, who pilots a restored 1958 Cessna 175, said while he loves flying, he does acknowledge the risks involved too.

Barry McGowin said he doesn’t spend a lot of time worrying about what could happen.

“It’s what he’s always wanted to do,” said Barry McGowin.

Eventually Jacob, who is home schooled, said he would like to use his pilot skills to help others in need. If all goes right, he’ll head to Alaska on a two-year apprenticeship later this year to learn about the mechanical side of aviation.

“I’d like to get into missionary aviation,” he said. “I want to be able to maintain an aircraft [as well as] fly it. I want to be involved in as many aspects(of aviation) as possible.”

Alabama Secretary of State Beth Chapman (right) signs a copy of her book for Bill Robertson at the South Shelby... read more