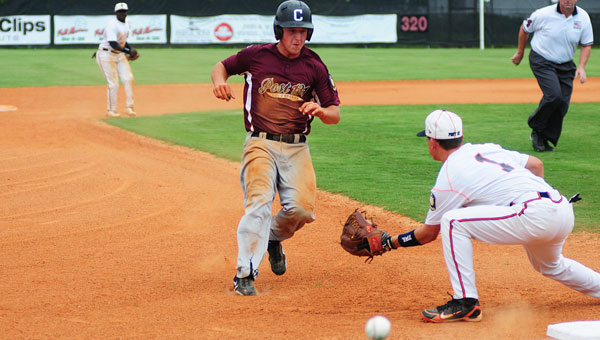 Logan Crook of the Columbiana Post 131 team heads to third base during a game against Dothan in an American Legion baseball tournament July 8 at Thompson High School. (Reporter Photo/Jon Goering)

When Jay Gibson left Sylacauga, he had his heart set on Columbiana.

Gibson, who coached an American Legion baseball team in Sylacauga, immediately became interested in starting a team out of the Columbiana Shirley-Holloway Post 131 when he heard about the organization’s recent rejuvenation.

With the help of Post 131 leaders, Gibson has carried a team representing Shelby County’s armed forces veterans across the Southeast this summer.

The team, which finished 2-1 in a tournament at Thompson High School this past weekend, is the first ever team from Post 131 to play American Legion baseball, according to Gibson.

The Post 131 team, which includes several former and current high school baseball standouts, has played some of the top American Legion teams across the Southeast.

Gibson said the team has held its own against state teams in places like Decatur, Dothan and Tuscaloosa. The Post 131 team has also beaten the defending state champions in Florida, as well as state runner-up teams from Tennessee and Georgia.

“The level of competition is amazing,” Gibson said.