Men to strut in stilettos for Safehouse

HOOVER — In August, dozens of men will understand what it means to walk a mile in a woman’s shoes — literally.

On Aug. 20, Safehouse of Shelby County is holding a Walk a Mile In Her Shoes event, as men and women alike will don high heels to walk a mile at Veterans Park on Valleydale Road in Hoover. 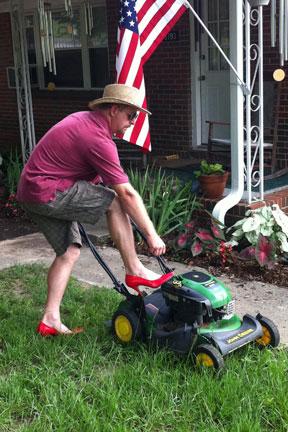 Helena resident Michael Johnson, a member of the Walk a Mile In Her Shoes committee, poses for a photo in heels to help raise funds. Johnson is also breaking in his heels while aerating the soil in his lawn. (Contributed photo)

Safehouse Executive Director Kathy Wells said the event is intended to get men involved in ending domestic and sexual violence against women.

“Most domestic violence and sexual violence perpetrators are men,” she said. “We know we’re not going to be able to stop the violence unless we have men stand up and hold other men accountable.”

Walk a Mile In Her Shoes is a national organization, but this is the first year the event will be held in Shelby County.

While walking a mile in high heels may seem impossible to many men — and even some women — Wells said Safehouse is encouraging people to put up with a little pain and do just that.

“We do have a number of people actually do it,” she said. “If people can’t wear heels, we still want them to come and join us. But the purpose is it’s a metaphor. We’re standing in solidarity with women on this issue.”

Wells said the event is creating a buzz.

“We’ve got a lot of people talking about it. At heart it’s a really fun event that focuses fun and community on something that’s very serious,” she said. “People get a kick out of just seeing it happen.”

To register for the event, visit Walkamilesafehouse.org. The walk will begin at 9 a.m. Aug. 20.

Logan Crook of the Columbiana Post 131 team heads to third base during a game against Dothan in an American... read more