Mrs. Sonya Damsker Lefkovits (1923-2011) was a woman who loved her family, friends and community, whose life was one of service.

From her first job as activities director at the Jewish Welfare Board, where she met her beloved husband Norman, to being a young wife raising her adored children, Norman Jr. and Marsha, to her last job as owner with her husband of the Columbiana Leader, Miss Sonya always made time to serve.

Through her working years as a wife and mother and during her later years as a widow, Miss Sonya played an integral part in the Columbiana community. Her many accomplishments of community service include: chairman of the Columbiana Public Library Building Committee (which she considered her proudest accomplishment); first ambassador of the South Shelby Chamber of Commerce; founding member of the Columbiana Merchants and Professional Association; honorary member of the Shelby County Historical Society; and listed in the Who’s Who of American Women. In 1949, the Columbiana Culture Club helped 15 women organized a new service club in Columbiana, the Vignette Club, which became federated in 1950. Vignette’s charter members were: Myra Falkner, Ginny Fowler, Nell Fulton, Wylodine Hill, Dottie Lefkovits, Sonya Lefkovits, Cecile Leonard, Hazel McCord, Margaret McGee, Muriel Mullins, Stella Roberts, Mary Nell Skelton, Lucille Turner, Sis Wallace and Gayle White. 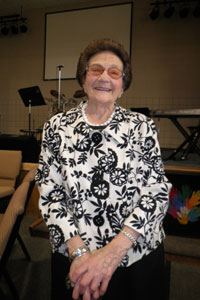 Sonya Lefkovits at the South Shelby Chamber Luncheon in her honor, three days before she left Columbiana to spend her last days in California near her daughter and son. (Contributed)

For the last 24 years, the Vignette Club has produced the Miss Shelby County Pageant. Miss Sonya was an active supporter of this fundraiser, which has given thousands of dollars for scholarships for Shelby County young woman and, through its Miss SC program’s ads and pageant’s ticket sales, raises money for Shelby County schools and other local needs.

In Miss Sonya’s memory and to honor her life of service, her daughter, Marsha Lefkovits Quick, and son-in-law, General Richard Quick, have established the Sonya Lefkovits Community Service Award for the Miss Shelby County Pageant. This $500 scholarship will be awarded to the contestant who exemplifies the selfless qualities of Miss Sonya’s life. Those qualities are a passion of spirit, life of service to others, commitment of time and resources to her community, always with a smile and with a kindness of heart.

Miss Sonya’s loving spirit of service will live on.

Come to Art Camp on a Green Shoe String