HARPERSVILLE – The Harpersville Police Department lost its drug dog after a car on U.S. 280 hit him on July 4.

The K9 officer, Hunter, escaped from his enclosure on July 4 and ran onto U.S. 280. Hunter was handled and cared for by Officer Michael Moore. Police Chief David Latimer retired his own female drug dog a few months ago. Latimer said Hunter assisted Moore and another officer locate five pounds of marijuana during one of his cases.

“Hunter was relatively new to Mike then, and he was still building a relationship. Dogs and handlers go through a dust-settling period where they learn to read each other and build a trust and mutual trust with each other. Mike was still going through that,” Latimer added. 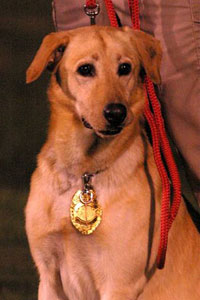 Latimer said his department refers to the drug dogs as “K9 officers,” and it takes about three months to train one of these dogs.

“It’s really simple. We’ll load a piece of PVC pipe with marijuana typically. We throw it, and let dog find it. Dog starts an association between the game and the drug,” Latimer said. “It’s really a game for the dog. We keep it that way for the their whole careers.”

Latimer said he takes drug dogs to local schools to do demonstrations for the kids. The officers show the kids how the dogs search for narcotics. He said he did a lot of bite demonstrations, using a sleeve for protection from the dog’s bite.

“I’d let some of the older kids wear the sleeve, and they’d get a charge out of it,” he said.

As the bite dogs are trained to attack on command, Latimer said they’re treated to respond like their human counterparts.

“We say it’s to ‘have a good mind.’ We don’t want a land shark biting anything that moves. We like to have dogs that have control, and use minimum force to gain compliance,” he said.

Latimer said Hunter was Moore’s first drug dog, and that officers form a strong relationship with their dogs.

“You form a really close relationship,” Latimer said. Of course you form one with a pet, but when the dog lives with you and goes to work with you everyday, you form a strong bond.”

The evolution of communities

Helena's Main Street in 1910 housed a meat market, a milliner and a general mercantile to provide for the everyday... read more