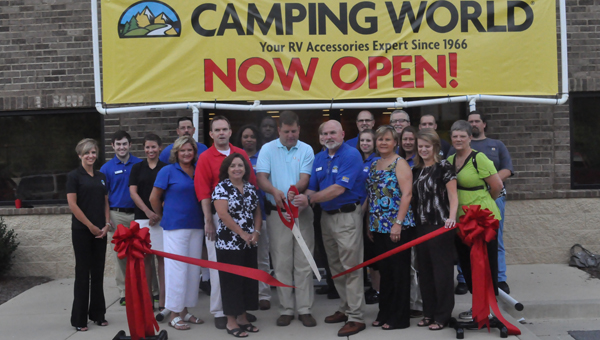 CALERA – Camping World celebrated the opening of its fourth store in Alabama on July 14 with a grand opening and ribbon cutting ceremony.

The Calera store, located in the showroom of Suncoast RV at 730 George Roy Parkway, has more than 8,000 items.

“We’re the No. 1 RV retailer in the country,” said Greg Skinner, general manager of the Calera Camping World.

The store is the chain’s 80th store nationwide. Other Alabama locations include Anniston, Dothan and Robertsdale.

The opening of the Calera location “came about rather quickly,” Skinner said.

The store opened June 25, within three weeks of signing a lease agreement with Suncoast RV.

“That’s quite a bit quicker than a typical Camping World store,” Skinner said, “but things were in place where we could do this.”

“I’m sure the company was looking at this market at some time, but didn’t have an opportunity until this came open,” Skinner added.

Skinner said setting up shop inside Suncoast RV is a win-win for both businesses.

“Their customers become our customers, and we actually bring in a lot of traffic,” Skinner said.

“That actually surprised me,” Skinner said. “I didn’t know we had that many members that close. We’re proud to have loyal customers.”

Camping World is open Monday through Saturday from 8 a.m. to 6 p.m., and on Sunday from noon to 5 p.m.