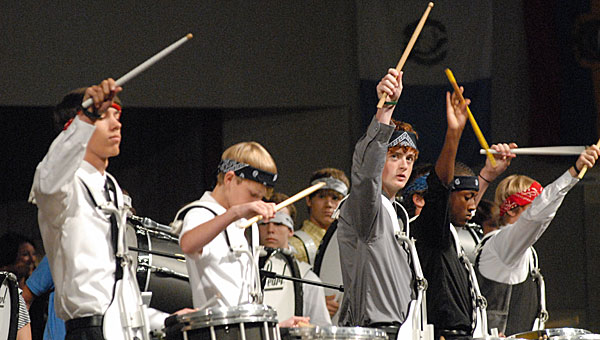 Hundreds packed the sanctuary at Alabaster’s Westwood Baptist Church July 14 to celebrate the life of Carson Sumpter, a 17-year-old Pelham High School student who died July 12 after a lengthy battle with bone cancer.

During the ceremony, members of the PHS drum line, of which Sumpter was a member for four years, played the school’s cadence. Several of Sumpter’s friends and family members shared fond memories of the rising PHS senior.

“I am so thankful for the gift and privilege to call Carson my son. He taught me how to be a better person,” said Kim Sumpter, Carson’s mother.

Sumpter, who was also an avid guitar player, was a member of the church’s praise team music ministry, had released one CD and was working to record his second.

Sumpter’s father, Jim, said he was proud of his son, and shared several stories from their time together.

Last year, the University of Alabama’s Million Dollar Band allowed Sumpter to play alongside his parents at Bryant-Denny Stadium during the school’s alumni band football game.

Jim Sumpter also said he was never able to beat his son in golf.

“We played a week ago today at Ballantrae,” Jim Sumpter said. “We were only able to play two-and-a-half holes. I had him on the first hole, but the second hole was a different story.

“He was an amazing kid. I couldn’t have asked for a better son,” Jim Sumpter added.

“Though he is away from me now, that will not last,” Gathings said. “I know God is looking at him now and saying ‘Well done, my good and faithful servant.”

Westwood Pastor Les Hughes said the crowd was a “testimony to Carson’s time on Earth.”

“Carson is still alive. He has just changed residences, and for the better,” Hughes said.