Lots of children in the United States attend camps far away from their homes each summer, but few cross foreign borders to get there.

Casey Crownhart, 15, of Alabaster traveled halfway around the world for hers—Helsinki, Finland, to be exact.

Crownhart, a rising junior at Jefferson County International Baccalaureate, was one of 30 students from around the world chosen for the Technology Academy of Finland’s second annual Millennium Youth Camp. She was also one of just two students selected from the United States.

When she saw her name on the final list, Crownhart said she did not believe it. She learned of the MY camp through a newsletter her father received at his company, and he encouraged her to apply, saying “it would be cool to at least go through the process.”

The trip was all-expenses-paid for the 30 campers, including flights and transportation from the airport.

“A lot of people wouldn’t have been able to go if not for that,” Crownhart said.

The application process was nearly as rigorous as the camp itself, with rounds of individual essays, project plans and phone interviews beginning in December 2010.

“The first (round) was open applications,” Crownhart said. “I think around 1,400 applied for it, and then you just wrote some essays on why you were interested.”

The selection panel chose the top 100 students based on their essays, and the students received a project plan related to their interests specified on their applications. After phone interviews with about 40 to 50 students, the panel released the top 30 a few weeks later by email.

“It was kind of stressful, because I didn’t check my email for a couple weeks,” Crownhart said. “I got the news that I was in the top 100 a couple weeks late, so I didn’t have much time to actually do my project.”

Before the camp, Crownhart said, the students started contacting each other on Facebook to set up a forum and work on different, separate group projects they would present in Finland. The group themes were renewable energy and natural resources, ICT and digitalization, climate change, applied mathematics and water.

“It was all based on what groups you applied for,” Crownhart said. “I was in the water group.” 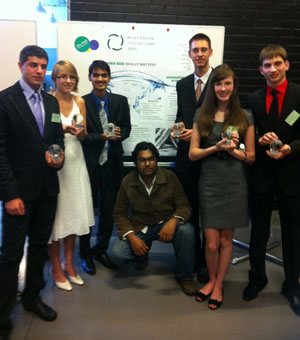 Casey Crownhart, second from right, stands with her Water group members in front of their poster after their presentation. (Contributed)

“The first year, they had stuff planned right when everybody got there,” Crownhart said. “This year, it was good because the first day and a half were just like get here, meet everybody (and) kind of relax.”

Crownhart and her peers were divided into five groups to prepare materials and explanations for group projects they presented at Aalto University.

“There were diplomats there and people from the university,” Crownhart said. “It was a little bit stressful, because towards the end of the week, we still weren’t quite sure about our presentation.

“I was actually one of the ones that got up and talked about our project. Only two of us did it. I was nervous, but it was OK.  We knew the project well,” she added.

Crownhart said she enjoyed the camp, which constituted her first trip to Europe.

“I also enjoyed meeting people from all over the world,” Crownhart said. “It’s an interesting experience to figure out how different parts of the world work and everything.”

Crownhart said she made many new friends, one of whom was Bonnie, the only other student chosen from the United States.

“We’re all friends on Facebook now,” Crownhart said. “It was kind of funny because everybody expected Bonnie and I to be really alike,” Crownhart said. “She’s from California, and (I’m) from here, so we were just as different as people from all the other countries were.”

Crownhart said one of her favorite parts of the camp was the international evening when all the campers shared a small piece of their homeland cultures with the other campers. According to Crownhart, hers and Bonnie’s performance was a crowd favorite.

“We sang the YMCA song,” Crownhart said. “Everybody loved the dance, and we gave out M&Ms and Hershey Kisses.”

The campers stayed in a hotel called Kiljava, about 45 minutes north of Helsinki and what Crownhart called “a home base, which was good because by the end of the week, we were all kind of settled in.”

Crownhart said she probably will not apply again for next summer.

“It’s kind of one of those things,” Crownhart said. “You just do it once, and then you want to let other people do it.”

MY Camp may not be Crownhart’s only visit to Finland, however.

“I’m actually considering going abroad to study now, because I have a place in Helsinki University if I choose to go there,” Crownhart said. “I’m definitely more interested in the sciences and things like math.”