COLUMBIANA – Shelby County held a public hearing July 18 at the County Administration Building to discuss the redistricting of the county’s nine commission districts.

The public hearing gave county residents a chance to comment on the proposed districts. 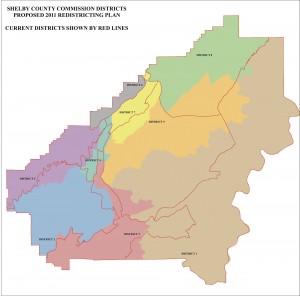 Eric Womack, of the county’s department of development services, gave a brief presentation of the proposed districts, once at 5 p.m. and again at 7 p.m.

During the 5 p.m. hearing, Alabaster City Administrator George Henry said Alabaster was opposed to the new districts. Henry said under the proposed districts the city would be divided among five commission districts.

Pelham was scheduled to have a representative present during the 7 p.m. hearing.

Earlier in the day during a work session, the Pelham City Council agreed to send Councilman Bill Meadows to the 7 p.m. hearing. Other council members said the proposed districts would divide Pelham among too many county commissioners.

In District 7, represented by Lindsey Allison, population would increase from 18,401 to 21,350, including a minority population of 3,406.

FROM STAFF REPORTS The University of Montevallo men’s soccer team has announced the signing of nine recruits for the upcoming... read more