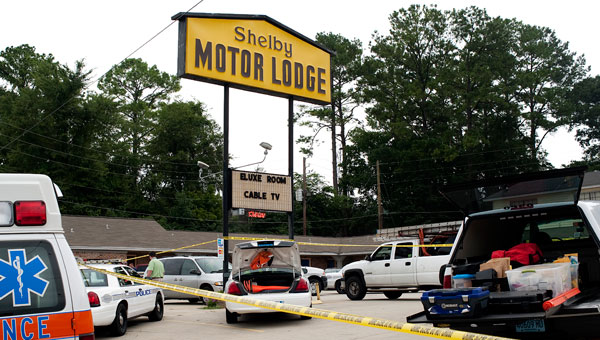 Alabaster police investigate the scene of a fatal July 15 stabbing at the Shelby Motor Lodge in Alabaster. (Reporter Photo/Jon Goering)

A woman and her infant daughter were declared dead July 15 and a man was charged with capital murder after what police said was the first double homicide in Alabaster’s history.

Columbiana resident Tryphena Lacey, 24, and her daughter, 9-month-old Trinity Lacey Patterson, died after police said they were stabbed at the Shelby Motor Lodge off U.S. 31 in Alabaster.

Patterson would have turned 10 months old on July 19.

Police responded to the hotel July 15 after they received a call from a hotel employee at about 11:45 a.m., said Alabaster police Deputy Chief Curtis Rigney. The employee told officers a blood-covered black male exited Room 11 at the motor lodge before police were notified.

After police arrived on the scene, they notified paramedics, who transported Patterson to Shelby Baptist Medical Center. The infant was later declared deceased.

Both victims appeared to have stab wounds, Rigney said.

The male, 34-year-old Lutcher, La., resident Terrance Patterson, was treated for minor injuries, before he was arrested and charged with capital murder. Terrance Patterson was the father of the infant, Rigney said. The suspect is currently being held in the Shelby County Jail without bond.

Rigney said the incident likely stemmed from a domestic dispute.

“We are still trying to investigate the scene and put the case together right now,” Rigney said. “As far as I know, this is the first double homicide Alabaster has ever had.

“The scene was really gruesome,” he added. 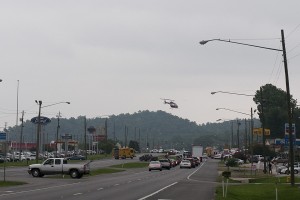 A Lifesaver helicopter flies the victim of a stabbing at the Shelby Motor Lodge in Alabaster to a local hospital on July 15. (Reporter Photo/Jon Goering)