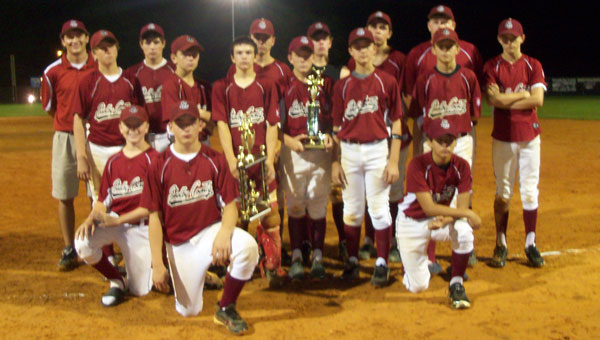 In addition to the second-place trophy, the Shelby County all-stars were also awarded the sportsmanship trophy, which was voted on by coaches of all 12 teams.

“The parents of our players were very proud that they earned this trophy,” said Shelby County coach Chuck Cofer.

The all-star team is raising funds ahead of the Dizzy Dean World Series, which will begin July 22. The team held a car wash July 16 at First United Security bank to raise funds. The all-stars washed all kinds of vehicles, including a Freightliner, a Kenworth and the truck from the funeral home.

The Shelby County all-stars defeated defending 14-and-under state champion Nectar 3-2 in the tournament’s opening game July 8. Hunter Horton earned the win in a pitching duel after striking out 11 batters and giving up only two runs in a complete game.

Shelby County defeated Cullman 15-1 in its second game July 9. Cody Jones, David Watkins and Wesley Walton each took the mound and combined to allow only one run in the game.

The Shelby County all-stars defeated Birmingham’s P.A.T. in their third game July 12. Jones allowed only five runs with 11 strikeouts in a complete game.

Horton had a single and a double and scored three runs. Jones finished with two doubles. Walton had an RBI single in the seventh inning.

Following its first loss of the tournament July 14 to Limestone County, Shelby County bounced back to defeat Huffman 12-1 that night behind the pitching of Jones and Watkins. Cofer led Shelby County with two doubles and a single, while Will Prosser finished 3-for-3 with a triple, a double and a single.

FROM STAFF REPORTS As the collegiate summer leagues across the country hit their all-star break, nine University of Montevallo baseball... read more