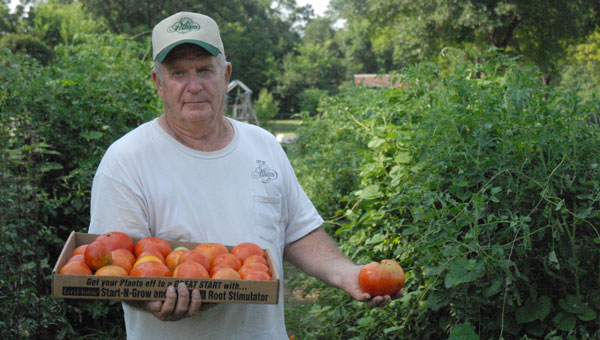 When Pelham resident Roy Lambert planted this year’s crop of tomatoes in a small garden at his house off King Valley Circle, he had no idea how enormous the results would be.

Most of the tomatoes in the garden stopped growing when they reached about 6 or 8 ounces, but the fruit on one bush kept becoming larger and larger as the weeks went on.

When the tomatoes on the bush were ready to pick, one of the red orbs weighed nearly 2 pounds, and the others hanging next to it did not weigh much less.

“I guess this is probably the biggest one I’ve ever grown,” Lambert said as he held a hand-filling tomato up to a box filled with several average tomatoes for comparison.

Lambert said he has been growing tomatoes at his house since he moved there in 1979, and he said he did not do anything different when cultivating his crops this year.

“I just stuck it in the ground and gave it some good fertilizer,” Lambert said, noting he planted the tomato bushes in the spring. “That whole bush grew to a pretty good size.”

Lambert said he planned to try to extract the plant’s growth potential by allowing the scale-tipping fruit to dry out so he could save the seeds for next year.

By NEAL WAGNER / City Editor Officials in Alabaster and Pelham said they are displeased with a proposed County Commission... read more