INDIAN SPRINGS — A proposed ordinance that would require new residential lot sizes in Indian Springs to be at least three acres was the source of controversy at a public hearing July 19.

Currently, lots must only be one acre or larger. The ordinance’s passing would mean that Indian Springs residents who own larger lots would have less flexibility if those residents decided to subdivide their lots and sell part of the land.

For example, a resident who owns 10 acres currently can subdivide that land into 10 lots. If the ordinance passes, the resident can only subdivide the land into three or fewer lots.

Indian Springs Mayor Steve Zerkis said the council is considering the ordinance because of several problems, including increased traffic and major flooding problems because of runoff from houses onto neighboring properties.

“We are looking down the road,” he said. “We’d like to take some action to anticipate what could be worse in the future.”

Resident Lana Swatek, who spoke in support of the ordinance, said her property couldn’t handle any more water runoff.

“We’re tired of it and we’re not going to take it anymore,” she said. “My property is being ruined. I can’t imagine this road taking any more water or any more traffic. My husband says if someone wants to build a subdivision across from us, we’ll stop it. We’ll file a lawsuit.” 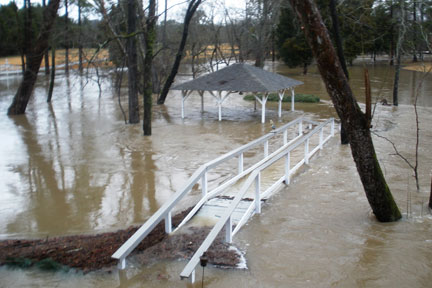 Lana Swatek's property has major problems with flooding, which is partly due to runoff from neighboring houses, she said. This photo was taken in February 2010. (Contributed photo)

Several residents spoke out against the ordinance, saying they should not suffer to solve other residents’ problems.

“I am not out for a money grab,” said Laverne Ramsey, who owns almost nine acres. “We invested so we could build five lots. You’re asking us to give our property to make things good for other people.”

Tricia Crapet, who identified herself as a “founding mother” of Indian Springs, said she believes the ordinance will bring property values down. She said she doesn’t consider subdivision of lots to be a problem, and only five parcels have been subdivided since the town was incorporated.

“You’re going to devalue people’s property who have three acres plus,” she said. “If you’re worried about developers coming, I can tell you they ain’t coming. Nobody in their right mind would start a subdivision right now. It’s not necessary. It is punitive and against what we stand for. We stand for less government, not more government.”

Council member Jack Mendel said he supports the ordinance as a way to preserve the quality of life in Indian Springs.

“I think if we’re not flooded out of our houses, and choked with traffic, this close to Birmingham and this close to the airport, with the schools we have here, we have an ideal community,” Mendel said.

After the two-and-a-half-hour public hearing, the council voted unanimously to put off voting on the ordinance for a month. Zerkis said another public hearing will be scheduled at a later date.