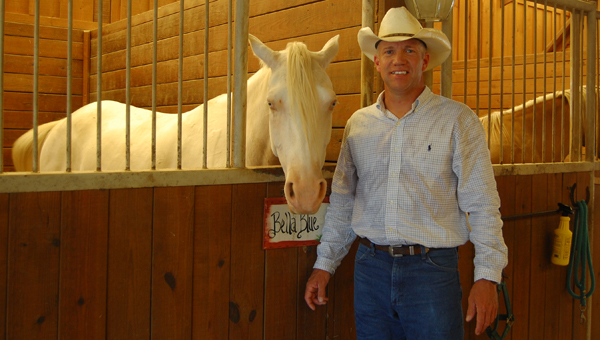 COLUMBIANA – It was a dream come true for Jennifer Head.

Just a few weeks after riding a horse by herself for the first time, the 16-year-old partnered with Ky Smith to put on a horse camp for children with special needs.

The camp, held July 9, was so successful that Jennifer and Smith will hold a second camp August 6 at Equine Co. of Alabama.

“Anybody that loves horses would love being there,” Jennifer said. “Anybody with special needs would be able to come.”

Smith, a CHA-certified trainer and instructor with more than 15 years of experience, said he didn’t know there was a need for such a camp until he met Jennifer.

“This is really more about Jennifer than it is me,” he said. “We just kind of ran into each other.”

They met at Pelham’s Harrington Equine Hospital, where Dr. Jud Easterwood had invited Jennifer to watch him perform surgery on a horse after Jennifer had expressed interest in being a veterinarian.

Through small talk with Jennifer’s mom, Vickie, Smith learned Jennifer wanted to learn to ride a horse by herself. Jennifer has spinal bifida and is confined to a wheelchair. She wanted to take special lessons but said waiting lists were too long.

Vickie Head asked Smith if he could help her daughter learn to ride alone.

“Normally, a special needs kid would have a back-rider and two side-walkers and somebody would lead the horse,” Smith said. “They’re just along for the ride. Jennifer wanted more than that.”

“We customized my saddle,” Jennifer said. “I started riding by myself after that. It was a blast.”

Smith said Jennifer wanted to give back to other kids, and the two eventually decided to hold a camp.

The kids were divided into three groups for three stations: a horse management course taught by Easterwood, fishing in a pond in front of the barn and riding three horses – Sassy, Babe and Lilo.

Perhaps nobody more than Jennifer, who said she’s loved horses since age 6. She has three horses – Jabbo, John Deere and Little Ricky. Jennifer will compete in a rodeo in Sterrett later this month.

Jennifer and Smith both said they’re excited to hold the second camp Aug. 6 from 9 a.m. to 2 p.m. Camp volunteers are needed. For more information, call Smith at 516-1379 or visit www.equinecoofalabama.com.

By NEAL WAGNER / City Editor Alabaster officials are looking to help the family of a woman and an infant... read more