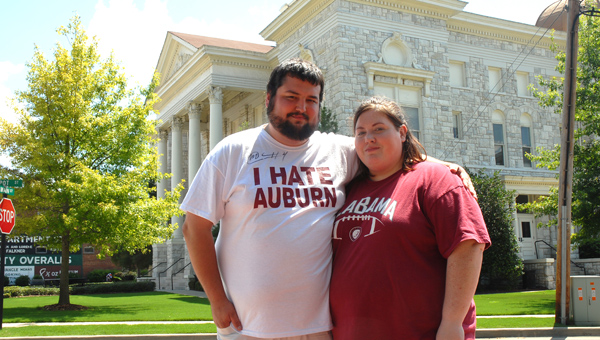 Eric and Amber Blackerby pose for a photo July 22 in front of the Shelby County Courthouse. Eric Blackerby, a Columbiana native, caused a stir earlier in the day with his "I Hate Auburn" T-Shirt at SEC Media Days in Hoover. (Reporter photo/Brad Gaskins)

Hours after his “I Hate Auburn” T-shirt caused a stir at SEC Media Days in Hoover, the 28-year-old fork lift operator returned to his hometown and wondered aloud what folks thought about him.

“I’m not a Harvey Updyke-type, crazy person, being hateful, trying to start stuff and fight with people,” said Blackerby, still wearing the T-shirt. “It was all in fun. I had the time of my life having fun with people.”

Blackerby said he was trying to represent Alabama fans in a “positive and humorous way.”

Blackerby said he works second shift at his job and didn’t get off until 1 a.m. Friday. He and his wife, Amber, 23, didn’t sleep. Instead, they stayed up all night and arrived in Hoover at 7:30 a.m.

During a press conference with reporters, Alabama coach Nick Saban was told there was a guy outside wearing an “I Hate Auburn” shirt. Saban was asked what he thought about it.

“I would tell him it’s not personal, that it really isn’t personal,” Saban said. “That is not really the way that we should respect the opponents that we have.”

Reporters swarmed Blackerby afterward. Some, he said, had the wrong idea about him.

“What I enjoyed about it was from the start I knew that people would see the shirt and assume that I was this dumb, Harvy Updyke-type of person,” Blackerby said. “They wanted to immediately put a microphone in my face because they just knew that I would say something stupid and hilarious.

“I was able to engage them in intelligent conversation. I thought it was very cool. I thought I did a good job letting them think that I was this type of person. I felt like I represented myself well.”

“I felt like I had just been put in my place by the man,” he said. “I was just like, ‘that really kind of hurts. I’m sitting here having fun, and Nick Saban doesn’t approve.’”

Amber Blackerby said it was a “crazy” day.

“We knew it (the shirt) would get attention, but we didn’t know it would get that much attention,” Amber Blackerby said. “We just thought it would turn a few heads. He was like a celebrity.”

“I spent all day long talking to people whose articles I read and I see on TV,” he said.

Blackerby said he “wanted to make sure Nick Saban knew” he wasn’t an irrational fan. As Saban made his way down a line of fans seeking autographs, Blackerby said he stepped forward with a message for the coach.

It was the second time Blackerby had worn the “I Hate Auburn” T-shirt. He first wore the shirt in June at Columbiana’s annual Liberty Day celebration, where “a lot of people walked up and enjoyed it,” he said.

Blackerby said he’s been to Alabama’s last three spring games but never a regular season game, something he said he hopes to do this season.

“I didn’t pick Alabama,” Blackerby said. “It was kind of chosen for me, because the first memories of my life are of watching Alabama football games with my granddaddy when I was 3 or 4 years old. I don’t remember a time when Alabama wasn’t the team to root for.”

Blackerby, who has never been a student at Alabama, writes for a blog called Saban’s Sidewalk. In the “about me” section, he describes his allegiance to Alabama as “unparalleled and completely inappropriate. I hate all other teams, and wish them peril.”