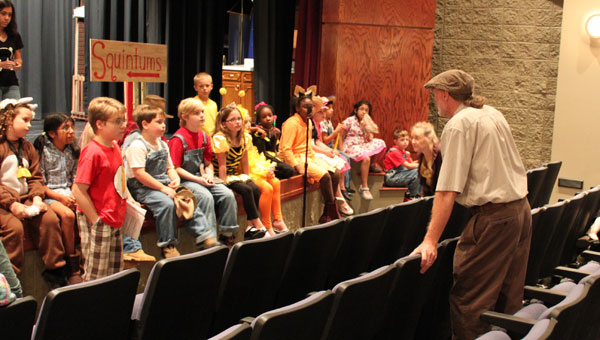 MONTEVALLO – The Parnell Memorial Library Theater rang with children’s voices singing and laughing during the children’s theater production of “The Sad Song of a Low-Down Fox.”

Dress rehearsal for the play was held during the afternoon of July 22, only hours before the play was set to open. Phil “Mr. Mac” McEntee wrote and directed the children’s musical for the second consecutive year. Due to the repetition, the 25 child actors were given the scripts well before rehearsals began to give them the opportunity to learn their lines.

“We have children from Montevallo, Pelham, McCalla, Centerfield and more,” said Mary Jane Evans, arts chairman of the Parnell Memorial Library Foundation (PMLF). “The play is an old fable, a folk tale. The music is his (McEntee’s) own.”

Evans said the PMLF supports the children’s theater each summer. The children auditioned for the roles in May and received the scripts soon after to learn the lines. The children rehearsed from 1-3 p.m. every day for two weeks, Evans said. 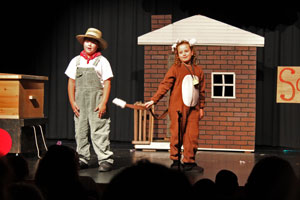 James Koch plays Bert and Hannah Sommers plays Salsa the cow during the production of "The Sad Song of a Low-Down Fox" on July 22. (Reporter photo/Christine Boatwright)

The theater was filled during dress rehearsal with members of Montevallo’s Boys and Girls Club.

“Don’t overact for them (your friends). Keep a perspective,” McEntee told his young actors before the rehearsal began. “Faces are important, because faces connect you to the audience and the audience to you.”

“It introduces children to theater, and it’s a production for children,” Rodgers said. “It builds confidence, and the director brings out the best in them. It’s a really growing experience.”

McEntee said the PMLF board asked if he could direct a play, and he decided to write his own play from a story he knew well.

“It’s the favorite story of my grandson,” McEntee said. “The more I read, the more I knew it could work.” 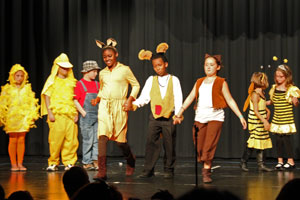 Guitar-playing McEntee had help performing the musical accompaniment from Chuck King on the trumpet and 12-year-old Thomas Frost on the electric bass guitar.

“Thomas saw the music this week. He’s as solid as a rock,” McEntee said. “His sister is on the crew backstage. It’s good because so many in the community are involved. Everyone’s working together.”