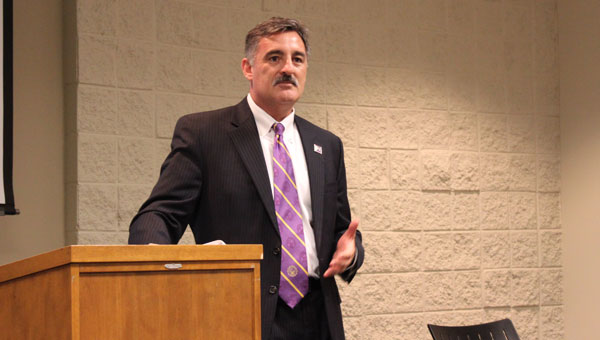 MONTEVALLO – The University of Montevallo’s 15th president, Dr. John Stewart, was the guest speaker during the Montevallo Chamber of Commerce meeting July 20.

Stewart presented an overview of the university, from a rise in admissions to new programs offered to future building and renovation projects.

Stewart said freshmen admission numbers are 18 percent higher than this time last year, and the number of incoming transfer students is holding steady. To increase admission numbers, Stewart described a marketing plan the university will begin in September. He said the plan is worth the cost, “even though faculty and staff haven’t had raises in three years.”

“People need to know about this wonderful product,” he said. “Once we get a hotel in town, it’ll stimulate prospective students to campus. We’re going to start (marketing to) a much younger age, like middle schoolers.”

Stewart said the university hopes to develop an eco park to attract middle school and high school-age students for educational field trips and provide a boathouse and outdoor learning classroom for university students.

Stewart also said the university would focus on other building projects in the near future. A $8 to $10 million, apartment-style residence hall is in the plans, as is a student life center in Farmer Hall. Stewart said the student life center will “hopefully” be completed by the end of the summer, and will offer more food choices and a place for students to “grab coffee between classes.”

The university will offer a new public relations minor, as well as video game studies and design minor. Stewart said that video gaming is a $20 billion industry, and the university will also offer board game design as a part of the program.

Stewart described the university’s small-school status as a boon.

“The University of Alabama is shooting for 50,000 students,” he said. “Many small schools are quaking in their boots, but it gives us an opportunity to distinguish ourselves farther.

“I know we’re always best when we’re small, and we’ll be a small school as long as I’m the president,” Stewart said.