CHS alumni having a groovy time

Country music artist Jason Aldeen’s “Dirt Road Anthem” takes you down memory lane to the good ole days, the way we were raised, our Southern ways. Potts farm was the place to go, where ya need to go, down to the hood, back in them woods.

“I’ve lived in Calera 57 years, but had never been to Briarfield Park. I turned in, passed some houses and saw people on one of the porches. I thought ‘no, I don’t recognize these people’ because I think everybody’s gonna look like they did in high school. I’m looking for blonde hair, red hair, curly hair — most of them had no hair. This wasn’t my crowd, they all looked about 50-something. The road came to a dead end and I realized that was my crowd, those old people.” 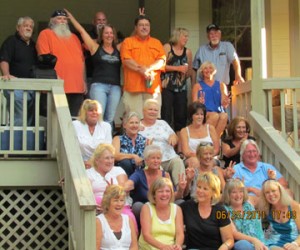 Loggins laughed recalling a suggested activity on facebook—play Spin the Bottle. This prompted memories and they talked over themselves sharing stories. Berry talked about the closeness of all the classes.

“Class sizes were 28-30 and first through twelfth grades were in the same building. We were like a family cause we were all together thoughout school. Everybody knew everybody and everybody’s family. We were a close knit group of people.”

“And everybody was neighbors or related in someway, so you had to be careful what you said,” Lucas added laughing.

“We sat in class and planned parties,” Berry said. “My friend Helen Wright Whealton had moved to Hoover so there were new boys. Phyllis had a crush on one of them, so we wrapped him up in a refrigerator box for her birthday — only Phyllis wasn’t surprised cause she helped plan it.”

They took me to the Dairy Queen where Lucas had her first wreck, a Saturday night dance at the National Guard Armory, the city pool, the rec hall for a game of ping pong and to do some flirting and we rocked out at KT Hill to eight track tapes played through flame speakers.

It was a wonderful trip. Thanks, girls, for taking me along!