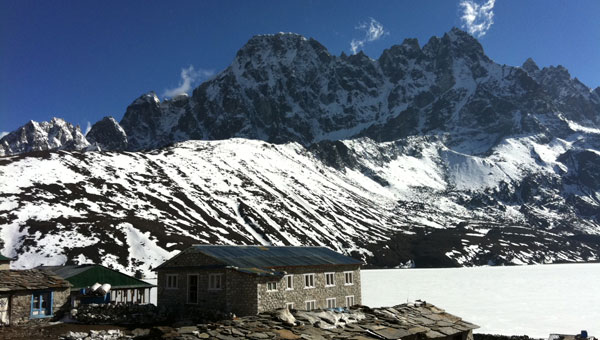 HOOVER – In April, Hoover Mayor Tony Petelos took three weeks off from his duties as Hoover mayor to travel to a place about as far as he could get from Hoover – both physically and figuratively.

Along with seven others, Petelos flew to Nepal to conquer his long-held dream of seeing and hiking part of Mt. Everest.

Petelos said making it that high was one of the toughest things he’s ever accomplished, and making it happen took a year of exercise and training. Petelos lost 35 pounds just getting ready for the trip, he said.

“At 16,000 feet, it’s almost half the atmosphere, so it would be the equivalent of taking one lung out of your body,” he said.

Petelos said he saw some of the most beautiful sights he’d ever set eyes on while on the mountain, but he and his group also saw real tragedy when traveling down Mt. Everest.

His group encountered a 28-year-old English woman who had a case of high altitude sickness. A doctor in Petelos’ group gave the woman some medication, and the group helped move her several miles to the next village and arranged for a helicopter to come the next morning to take her for medical attention, but the woman passed away that evening.

“We thought she seemed to be doing better when the doctor treated her, but high-altitude sickness is very dangerous,” Petelos said. “When the weather’s good, you’ll see helicopters going back and forth, moving people off the mountain. Everybody is affected differently by high altitude.”

Petelos said the trip also reminded him to be grateful for the comforts of home.

“Nepal is one of the poorest countries in the world, and when you go over there and see the people and the way they live, it made me appreciate our country so much more,” he said. “Just drinking a clean glass of water is difficult to do there.”

Petelos will speak about his trip and show photos during a presentation at the Hoover Library Plaza Aug. 4 at 7 p.m. Information will also be available about the Great Home Orphanage, a Nepalese orphanage serving children who have lost their families to civil war.

FROM STAFF REPORTS Former Oak Mountain High School volleyball standout Samantha Skinner has had a change of heart since the... read more