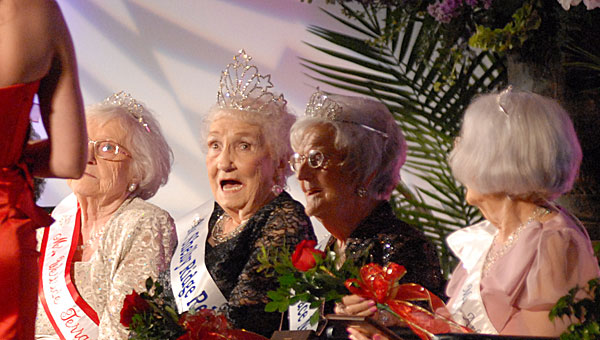 The representative from Alabaster’s Shelby Ridge Nursing Home and Rehab Select beat out 73 other contestants July 25 to take second place at the statewide Miss Alabama Nursing Home Pageant at the Wynfrey Hotel in Hoover.

Bessie Smitherman, 90, who was crowned Miss Shelby Ridge Rehab Select in May, gasped and smiled as the judges announced she was the first runner-up in the statewide competition.

“I think it’s just wonderful,” Smitherman said, still smiling and laughing after the pageant. “I had no idea I would get this far, and I enjoyed every minute of it.”

Those who were not in the top 10 attended the pageant as the event’s honor court, and cheered and applauded their fellow contestants.

During the pageant, the judges asked each of the top 10 contestants an on-stage question related to their lives, their nursing homes or current world events.

A judge asked Smitherman “If you could relive one moment, what would it be and why?”

“I would be married again. I met the love of my life. He was my dance partner,” Smitherman responded. “I stayed with him, or rather he stayed with me, for 50 years.

“I still like to dance, but I can’t find anyone up there to dance with me,” Smitherman added, drawing applause from the audience of several hundred.

Smitherman has two sons, two daughters, eight grandchildren and nine great-grandchildren. She said she enjoys taking shopping and restaurant trips with her friends at Shelby Ridge, and attending birthday parties.

“I’ve been on a journey, and everyone has been so nice,” Smitherman said after the pageant. “I’m so glad for everything they do for me (at Shelby Ridge).”