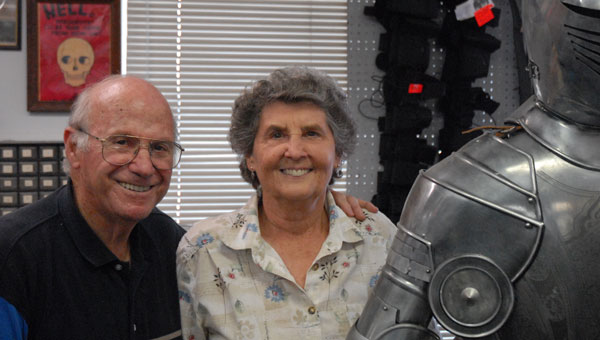 Nick Bondi and his wife, Jennifer, pose next to a suit of metal knight armor at their military surplus store, the Command Post, in Pelham. (Reporter Photo/Neal Wagner)

When Nick and Jennifer Bondi, owners of the Command Post Army surplus store in Pelham, moved to Alabama more than 30 years ago, they didn’t know if they would enjoy the American South.

Nick Bondi had just served in the Rhodesian Military Reserve in the country now known as Zimbabwe, and political problems were beginning to mount in the country, which was gripped by the Bush War during the 1960s and ’70s.

“We really had to leave Rhodesia because of the political problems,” Nick Bondi said.

“There was just nothing left for us there,” his wife said.

One of the family’s closest friends was living in Montgomery, and urged the family to consider moving to Alabama when they made the trip to America. The Bondis had visited the state before, and liked what they saw.

However, not all of the Bondis’ friends felt the same.

“Nick got here (to Alabama) about six months before I did,” Jennifer Bondi said. “I went to play golf one day, and one of the ladies said ‘Oh, you’re going to Alabama? What are you going there for?’

“We said “If we don’t like Alabama, we won’t stay too long,” she added. “We have been here for 31 years, and we have no intention of going anywhere. Everyone is so friendly.”

After the family moved to the Birmingham area, the Nick Bondi and one of his friends operated a military surplus store in Tarrant.

When Bondi’s business partner disagreed with Bondi’s plan to offer more than just Army and Navy surplus items, Bondi opened the Command Post in 1984 in the building next to what is currently Quality Time Powersports off U.S. 31 in Pelham.

With his own business, Bondi was able to expand his offerings to include children’s military-styled items, military items from many different countries and commercial items.

Today, the store is full of everything from armed forces fatigues to a suit of metal armor to camouflage items of every type imaginable.

In 1996, the Bondis moved their business to its current location behind Anthony’s Car Wash off U.S. 31.

After nearly two decades of selling everything military, the Bondis are planning to retire from the industry, relax at their Indian Springs home and spend more time with their family.

Now, the Bondis are attempting to sell off much of their excess inventory, and are hoping someone purchases the business and continues to operate it.

“It will be a tragedy if we have to close down,” said Nick Bondi, who will turn 80 next year.”

Over the years, the business has gathered a loyal following, and many customers were disappointed to hear the Bondis were moving on, Jennifer Bondi said.

“For Nick, it will be really hard to leave the business. He is very much a people person,” she said. “He is going to miss this very much.”

By NEAL WAGNER / City Editor The Alabaster Planning and Zoning Board likely will decide in September if it will... read more