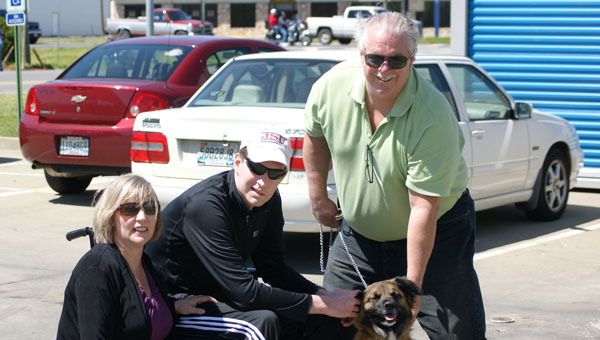 The son of an Alabaster councilman is back home with his family and has made “great leaps and strides” since he was involved in a serious automobile crash in November 2010.

Alabaster resident Kyle Hicks, the son of Councilman Bob Hicks and his wife, Lynn, spent nearly six months in hospitals and in-patient rehabilitation clinics throughout the Southeast after he was involved in the wreck.

On Nov. 25, 2010, Kyle Hicks’ truck lost control, left the road and struck two trees near the intersection of Yancy Drive and Aviation Road in Bessemer. Hicks sustained several serious injuries, including head injuries, in the incident.

After Hicks was hospitalized, he underwent in-patient physical therapy at the Shepherd Center in Atlanta before he returned home to his family in Alabaster in late May.

“We are just so thankful he is with us, because he was not expected to make it,” Lynn Hicks said. “To see the progress he has made is just amazing.”

Before his wreck, Hicks was scheduled to be deployed overseas with the Army. Since he returned home, Hicks has been involved in a community-based U.S. Army Warrior Transition Unit, which provides personal support to wounded soldiers.

On August 4-7, Hicks will participate in the Lakeshore Foundation’s Operation Alpha, which will provide several sports and recreation activities for recently wounded members of the armed forces.

“He is having to re-learn how to do everything,” Lynn Hicks said. “From a day-to-day perspective, he has been doing great. He has had to work hard to regain his skills.”

“He is coming along. He has made great leaps and strides. It’s amazing the progress he has made since he got back home,” she said. “He likes seeing familiar faces.

“He has always been competitive, so he is certainly motivated to get better.”

By BRAD GASKINS / Staff Writer A 4 year-old girl died Tuesday in an accidental drowning in the Pea Ridge... read more