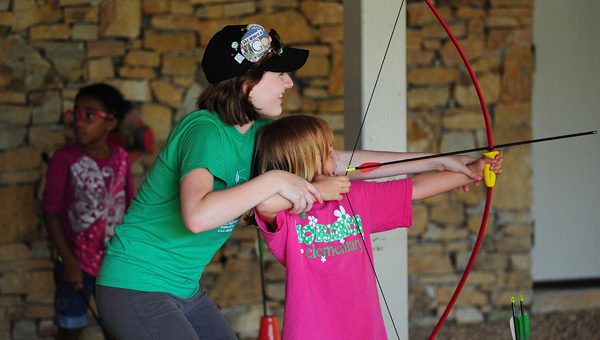 CHELSEA – In honor of the 100th anniversary of Girl Scouts, more than 500 Girl Scouts and leaders from across the state attended the kick-off celebration at Kanawahala Program Center in Chelsea on July 30.

The celebration was named “Juliette’s Jamboree” in honor of Juliette Gordon Low, the founder of Girl Scouts in March 1912. During the jamboree, girls canoed, climbed the rock climbing wall, made arts and crafts, did archery, shot BB guns and a variety of other outdoor events.

As the celebration was only the kick off, the Girl Scouts of North-Central Alabama will hold many other events throughout 2012, said Hilary Perry, director of communications and advocacy.

During cookie-selling season, the Girl Scouts will offer a 100th anniversary cookie, which will be reminiscent of the lemon icebox cookies previously sold by the Scouts, according to Trista Cooper, community development manager. 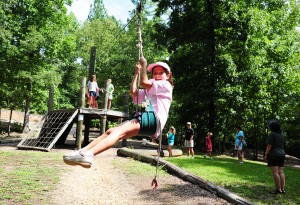 Deanetta Simpson and her troop of Brownies and Juniors from Wilsonville Elementary worked on earning badges during the jamboree, as well as having fun participating in the events.

“Once you get into Girl Scouting, it’s so much fun for the girls,” Simpson said. “They love it, and I can see the growth in them already.”

The jamboree offered a museum for the girls to learn about past Girl Scout uniforms and handbooks.

“We found samples of every uniform ever approved by the Girl Scouts except the very first,” Ruth Yarbrough said. “The uniforms changed for fashion in the ’70s. Everyone wanted bell bottoms. and everyone had to be trendy.”

The most recent Girl Scout handbook offers legacy badges — those badges that have always been a part of Girls Scouts, including cooking and first aid.

“We do change our badges to stay relevant, but even in 1912, girls earned a businesswoman badge and economist badge. We change to stay relevant, but the basics are still there,” Perry said. “With technology, we’ve incorporated badges such as Internet safety and building websites, which you probably didn’t have even 15 years ago. We have to move with how the country changes.”