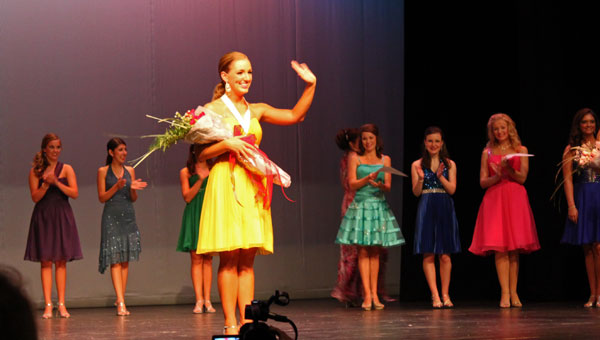 The Junior Miss scholarship program was renamed to Distinguished Young Women in order to distinguish the program from typical beauty pageants. Beauty, in fact, was not on the judges’ score cards.

The 22 rising high school seniors were evaluated on scholastics, interview, talent, fitness and self expression on July 29-30 at Oak Mountain High School. Only eight contestants had the opportunity to perform on Saturday evening, however, as the judges culled the group from Friday’s competition activities. 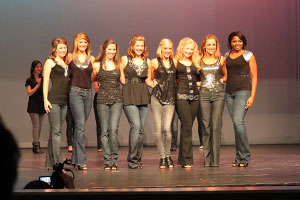 Only eight of 22 contestants continued through the competition on July 30. (Reporter photo/Christine Boatwright)

Danielle Dubose, the first-ever Alabama Distinguished Young Woman winner from Shelby County and last year’s Shelby County winner, won almost $45,000 in cash scholarships during her pursuit of the national medal. The finalists of the Shelby County scholarship program received a minimum of $900 apiece, while more scholarships were given to higher-placing girls.

During the on-stage interview portion, the emcee, former Shelby County Junior Miss 2006 and Miss Alabama 2009 Liz Cochran, asked Walker how she felt leading the pledge at the State House of Representatives.

“I was invited by Cam Ward to lead the pledge at the State House of Representatives because of my work with autism,” Walker said. “I said the pledge with two autistic boys, who were so sweet. I loved it and hope to do it again someday.”

FROM STAFF REPORTS MONTEVALLO – The University of Montevallo will hold a memorial service to celebrate the life of Cynthia... read more