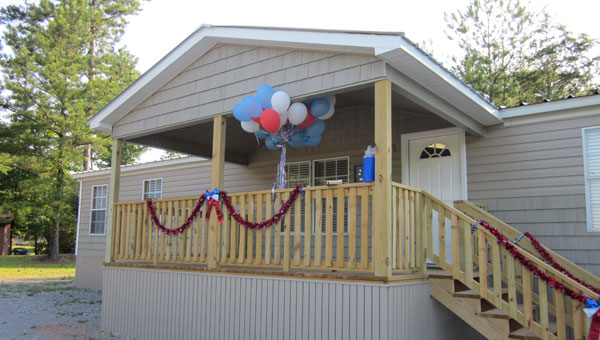 Did you happen to see balloons flying over Calera Saturday, July 2, and think it was a July 4th celebration? If so, you were wrong. Open Door Church was celebrating God’s goodness of adding a new family life center to its campus.

Co-pastors Terry and Shirley Hosmer began their ministry in Calera in September 2005 in a double-wide mobile home. In 2006, they purchased their present location at 1295 2nd Ave. The brick building on the campus is utilized for the worship center and adult classrooms. A single-wide trailer was donated to temporarily house the children’s department.

In 2010, they had again outgrown their facilities. Pastors Terry and Shirley told the congregation to need more room is a great position to be in, and God always provides more when there’s a vision. The church family sought the Lord in prayer, and he gave them double the previous space.

The church family gathered on the campus July 2 for food, fun and a time of celebration. Pastor Terry cut not one, but two ribbons — one at the main entrance and one at the handicap entrance, which was designed to be accessible for wheelchairs and other special walking needs.

Member Sandie Giles is amazed at how quickly their family has grown.

“We are truly blessed with all the things God is doing here,” she said.

Pastor Terry described himself as a man with a heart to do the Lord’s work.

“Shirley and I were born again in 1980 at Oak Mountain Assembly of God. We began ministering there, then moved to Helena Pentecostal Worship Center, where we served as youth pastors,” he said. The Lord called us to start a church, and we began in our living room with seven people before establishing Christian Lighthouse Church in Saginaw. Several years later, the Lord called us out to evangelize. Then in 2005, the Lord laid on our hearts to pastor again — this time Calera. I also worked in the insurance and healthcare industry, but now it’s solely the Lord’s work I do.”

“Open Door is a joyful place to worship where everyone is welcome,” Pastor Shirley said. “We study the God’s word from the true source, the Holy Bible. There is freedom to worship whether holding your hands high, on your knees or on your face at the altar.”

CHS alumni having a groovy time